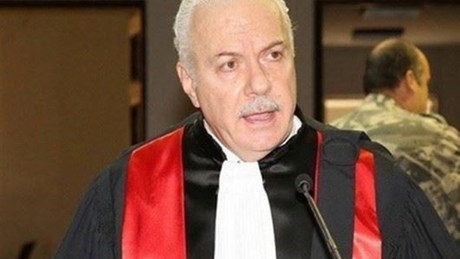 State Prosecutor Ghassan Oueidat has said there are no political backgrounds to the search procedure that Archbishop Mussa al-Hajj had been subjected to in Naqoura, negating that Mussa had been arrested or offended.

The Patriarch of the Diocese of Haifa and the Maronite Holy Land had been questioned for 12 hours earlier this week upon his return from Israel with large quantities of medicines, foodstuffs and canned goods, in addition to $460,000.

“The funds that he was transporting, around $460,000, are not owned by the church but they rather came from collaborators residing in Israel, the majority of whom work for the enemy in the occupied territories,” Akiki said in an interview.

"Transporting products from Israel is prohibited by law," Oueidat said, blaming the politicians who had criticized the move. "Do not attack the judiciary for enforcing a law that you have made," he said. "Amend the law, if you don't want it," he added.

The arrest of al-Hajj had drawn angry reactions from Christian leaders, who considered it "an attack on the Maronite Church".

Earlier this week, Maronite Patriarch Bechara al-Rahi headed an emergency meeting with other Maronite clerics , condemning al-Hajj's arrest, which they dubbed a "charade", and called for the case to be "closed immediately".

"We demand... the confiscated aid be returned to the archbishop so that it can reach its beneficiaries," they said in a statement.

People in Lebanon are starving, especially if they don`t get any help from relatives outside of Lebanon. Is it right to blame and punish innocent Lebanese men, women and children like this? Its a force majeure situation.

What force majeure? The Bishop is allowed to go in and out of Israel. They confiscated the money under the pretext of money laundering while ignoring the billions that Hezbollah brings in from Iran. Akiki is a tool for hezbollah just like all the judiciary and security chiefs.

Agree. Disgusted about Jumblatt also, how he tries to imply that the money is from the Israeli state for political purpose. He should try himself to live on the bugdet that there south lebanese families does without help from abroad. He would not last a week!

This doesn’t explain why Carlos Ghosn was immortalized shaking hands with the Israeli president in occupied Palestine and he hasn’t been summoned for interrogation by the General Security. Fadi Akiki isn’t arresting Hochstein either, an Israeli citizen visiting his father in law, Nabih Berri.

Carlos Ghosn is a supporter of Aoun.... that is why.

From what I’ve been told, their connection is deeper than that, he has joint business ventures with the thief-in-law, JB.

People, if you’re sick of selective justice, rise up! Torch their homes, abduct their children and force them to flee like rats on a sinking ship.

The law is the law and it is clear in this case.

If the law is the law, then please (try to) explain to us how the millions being brought into the country by Hizballah from Iran is legal.

The problem isn’t the law, but the selective justice as well as the double standards.