Greek firefighters in uphill battle to save famed natural park 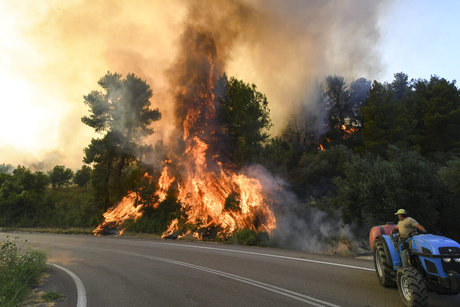 Greek firefighters on Monday battled a raging fire threatening the Dadia National Park, known for its black vulture colony, as the country scorched under a blistering heatwave.

The Mediterranean country is reeling under a heatwave that began on Saturday and is expected to last 10 days. Temperatures were set to rise to 42 degrees Celsius (107 degrees Fahrenheit) in some regions and the country is battling three major wildfires.

Scientists say human-induced climate change is amplifying extreme weather -- including the heatwaves, droughts and floods seen in several parts of the planet in recent weeks -- and say these events will become more frequent and more intense.

On Monday, 320 firefighters, two water-bombing planes and four helicopters were deployed to contain the fire at the Dadia park, which broke out on Thursday.

Some villages in the area have been evacuated. The flames have already destroyed nearly 500 hectares (1,220 acres) of woodland.

Dadia is one of the most important protected areas in Europe, offers ideal habitat for rare birds and is home to the only breeding population of black vultures in the Balkans.

It hosts three out of the four vulture species of Europe -- the black vulture, the griffon vulture and the Egyptian vulture -- and 36 of Europe’s 38 species of raptors.

Its varied habitats also support 104 butterfly species, 13 amphibian species, 29 reptile species and about 65 mammal species, 24 out of which are bats.

"It's an uphill battle, a fight to ensure the survival of this exceptional ecosystem," the minister for climate crisis and civil protection, Christos Stylianidis, said on Monday after visiting the affected area over the weekend.

"After this difficult fight, experts must look into redressing the problems sparked by the fire," he said, underscoring the need to buttress the "resistance of the ecosystem in the future".

The civil protection agency said on Monday there was a high risk of forest fires given the heatwave and the strong winds.

Fires have raged in the north, east and south of the country, including on the tourist island of Lesbos, where around 200 people were ordered to leave the village of Vryssa on Sunday to escape the flames.

The international community has agreed that climate change poses an existential threat to human systems and the natural world -- but there are a myriad ways to take action.

Earth's average temperature has warmed just over 1.1 degrees Celsius since the industrial era and the United Nations says it is currently on track to warm some 2.7C this century.