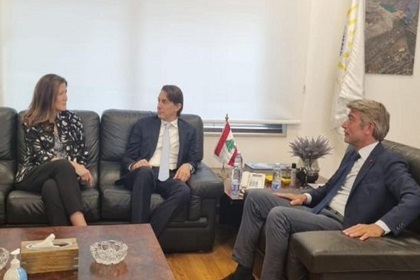 Speaking after the meeting, Fayyad said Hochstein is “carrying a new proposal to the Lebanese officials.”

“He told me that it is positive and denied all rumors about joint (gas) extraction between Lebanon and Israel,” Fayyad added.

“Hochstein told me that he will negotiate with the World Bank over the conditions for endorsing the electricity plan that Lebanon has devised,” the minister went on to say.

MTV meanwhile quoted Hochstein as telling Fayyad that the video released Sunday by Hezbollah will not help the negotiations because Israel will become more intransigent due to its parliamentary elections. The video shows gas production barges in the Karish field and their coordinates. It ends with footage of a rocket with the words "within range" in Arabic and Hebrew. Hezbollah also warned Israel in the video against "wasting time."

A senior Israeli meanwhile said that Hochstein would deliver a new Israeli proposal that "includes a solution that would allow the Lebanese to develop the gas reserves in the disputed area while preserving Israel's commercial rights."

"The offer that has been relayed is a serious proposal that can transform Lebanon from a country of economic ruin and energy crises to a natural gas-producing country, by enabling it to cultivate this resource," the official said.

Did the General Security interrogate this Zionist Israeli citizen when he entered Lebanon? Did they screen his luggage? Or do they just piss off Lebanese citizens because they’re easy targets?

Hang Abbas Ibrahim and his goons for terrorizing the Lebanese State!

By "Zionist" Israeli do you mean "Jewish" Israel? Many people like you use the word Zionist in lieu of Jewish.

No, I have Jewish ancestry and Jewish relatives still alive. None of them were or are Zionists. Zionism is another form of terrorism, I put them on the same level as ISIS/Hezbollah/Taliban , Zionists are the dregs of humanity.

I recently came across someone who had “levanon” as last name, I had to Google it, basically all “Zionists” who changed their last names to Levanon had either Polish, Lithuanian or Russian last names.

Israel is a fake country, with a fake Jewish heritage, fake language and fake faith. You guys are all real Europeans. Look at this Hochstein, he doesn’t look Levantine or Middle Eastern because he’s not!

Reminder:
Hochstein Amos was born in Israel. His parents were American Jewish immigrants.[7] He served in the Israel Defense Forces from 1992 to 1995. After finishing his army service, Hochstein moved to Washington, D.C. after receiving an internship on Capitol Hill….