My Journey in Lebanon: An op-ed by outgoing U.N. coordinator Rochdi 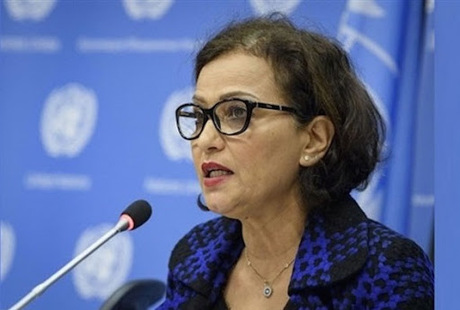 Outgoing U.N. Resident and Humanitarian Coordinator for Lebanon Najat Rochdi has penned an op-ed concluding her mission in Lebanon before taking up her new role as U.N. Deputy Special Envoy for Syria.

In her article titled “My journey in Lebanon”, the outgoing RC/HC reflects on her two-year mission in Lebanon, the many challenges facing Lebanon, the impact the U.N. has made on her watch, and the prospects for Lebanon’s recovery and "prosperous future." She also stresses the need for justice and the renewal of Lebanon’s social contract.

Below is the full text of Rochdi's op-ed as received by Naharnet:

"My Journey in Lebanon

I had only been in my position of UN Resident and Humanitarian Coordinator for Lebanon for three days when the devastating explosions ripped through Beirut Port on the 4th of August 2020. I was home, hovering over my files, preparing for a new journey in a country where I have always wished to work and serve its remarkable people.

The beautiful city of Beirut was rocked by an enormous blast claiming the lives of almost 200 people, while thousands were injured and whole neighborhoods were pulverized. The Beirut port explosion was a turning point for Lebanon, for its people but equally for me. The effects of this tragedy are still reverberating two years later as the country continues to strive to find a path to justice and to emerge from this catastrophe that has touched every single person in Lebanon and elsewhere.

I listened to stories of shock, loss, and suffering during many of my field visits. Perhaps one image tells the tale of my time in Lebanon. The picture I have seen while walking around the city of Beirut when I was extremely moved by the individual efforts of Lebanese citizens who sprang to help their fellows in some of the most impacted neighborhoods of Beirut. They sent a very strong signal of human and national solidarity.

That solidarity was equally shown by the international community, I call them the “Friends” of Lebanon. We saw the immediate pouring of support from all around the world. I want to thank them for being always there for Lebanon and its people, for their trust and unwavering support. It has not been easy at all but in the middle of the darkness, our common humanity made it, and together we kept the light at the end of the tunnel. I hope that you, the “Friends of Lebanon”, continue to push and advocate for the good causes of the people.

We do have a collective responsibility to preserve Lebanon’s stability and support its recovery so its people can eventually enjoy prosperity, peace, and sustainable progress. Solidarity is the best of our humanity. It does not have any religion, gender, nationality, or political agenda. It is the only pathway forward for Lebanon’s recovery. In fact, throughout my two-year journey in Lebanon, be it through responding to the horrendous Beirut port explosions, the COVID-19 pandemic, or the unfolding socio-economic crisis, our common humanity has shown that we are capable of great things, but only when we work together.

Undoubtedly, the recovery of Lebanon lies in the hands of the Lebanese State and depends heavily on its political will and commitment to implement significant reforms. It is also well recognized that Governments work better when they are guided by a Social Contract that takes the voices of all groups of societies into account. This is particularly relevant and essential in the context of Lebanon. The people of Lebanon want their fundamental rights and freedoms to be respected. They want a say in decisions that affect their lives. They want to enjoy equal rights and equal representation in public and private policymaking as clearly stated in the Lebanese constitution.

As such, renewing the Social Contract will provide a binding force of mutual rights and duties between the State and the Lebanese people, where transparency, inclusion, accountability, and citizenship are at the heart of this mutual commitment. This will help re-establish trust in the political system and public institutions.

My journey in Lebanon has been incredible, with challenges, but also with key milestones, and some legacies to build on, such as the Reform, Recovery and Reconstruction Framework (3RF), the Emergency Response Plan, and the UN Sustainable Development Cooperation Framework that will steer the path of Lebanon’s sustainable development. I have enjoyed substantial support and goodwill from the government, academia, media, Civil Society Organizations (CSOs), ambassadors, and other local and international partners. For this, I remain forever grateful, as this would not have been possible without their steady support and tremendous help.

I leave this beautiful country with a heavy heart and with sadness because I know that much more can be done and I wish I was able to do more. But I am very proud of what has been so far achieved by the UN Development and Humanitarian Systems, be it for the Lebanese people, local communities, public institutions, and the most vulnerable groups, including migrants and refugees.

The UN’s work is far from done. The challenges are immense, yet the will of the UN Country Team in Lebanon and people’s determination are even stronger. As Lebanon embarks on a new phase of recovery and reform, strengthening partnerships is indispensable to support a swift and systemic change that is geared towards people’s needs and aspirations.

Preserving Lebanon’s stability and prosperity is in everyone’s interest. The beauty of Lebanon lies with its people. The country thrives on its diversity, coexistence, and rich human capital. In our collective endeavor to help tackle its multi-faceted crisis and chart a post-crisis future that will ensure greater equity, opportunity, and dignity for all, I believe Lebanon has offered a valuable lesson for humanity… Conversely, I can firmly say that humanity needs Lebanon.

To all Lebanese, I say and assure them that yes there is hope because Lebanon has friends that have never and will never give up on it and its people and I ask you to cherish your country and preserve its unicity and beauty because there is only one Lebanon. I will always count the lucky stars that I got to work for this fascinating country.

Lebanon of today needs more than ever its Lebanese."

They want to enjoy equal rights and equal representation in public and private policymaking as clearly stated in the Lebanese constitution.

Simple solution, separate Hizbollahstan from Lebanon into 2 independent countries since they have nothing in common and see Lebanon becoming a UN neutral nation and rise like a phenix in less than a year. Hizbollahstan can have its rocket nirvana and thousand year war with Israel, this time without sucking the life and blood of Lebanese. Hey, even give Cana gas fields to Hizbollahstan if this guaranty getting rid of this stage 4 cancer so Lebanon can regain its freedom, democracy, civility and intellectual vibrancy.