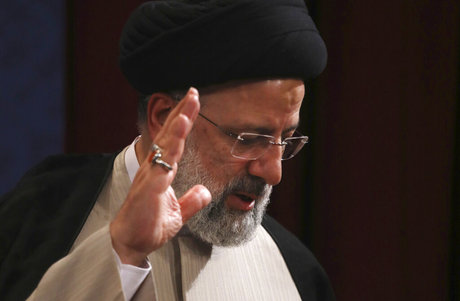 Iran's ultraconservative President Ebrahim Raisi came to power a year ago amid attempts to revive a 2015 nuclear deal between Tehran and world powers.

The accord gave Iran sanctions relief in exchange for curbs on its nuclear program to guarantee that it could not develop an atomic weapon -- something it has always denied seeking.

Former US president Donald Trump dumped the deal in 2018 and began re-imposing painful economic sanctions, prompting Iran to start stepping back from its commitments.

In April 2021, with President Joe Biden in the White House, talks on rescuing the accord began in Vienna.

But they have stalled since March amid differences between Tehran and Washington on several issues.

Here are the main developments over the past year:

As he is sworn in by the parliament on August 5, 2021, Raisi says Tehran backs any diplomatic moves to lift US sanctions, but will not bow to pressure.

Talks on reviving the nuclear deal resume in November after a pause around Iran's presidential polls.

Iran says its delegation "is in Vienna with a firm determination to reach an agreement".

February 2022 sees expressions of optimism from the parties to the talks, but Russia's invasion of Ukraine slows the issue down later in the month.

On March 21, US State Department spokesman Ned Price says an agreement "is neither imminent nor is it certain".

Tehran says the move shows US "ill will" towards the Iranian people.

On May 25, the US point man on Iran Rob Malley warns "the odds of a successful negotiation are lower than the odds of failure."

On June 8, the IAEA adopts a resolution submitted by Britain, France, Germany and the United States that condemns Iran for the first time in two years.

Germany, Britain and France urge Iran to "cease its nuclear escalation", while US Secretary of State Antony Blinken warns of "a deepening nuclear crisis".

On June 16, Washington sanctions a network of Iranian petrochemical firms, as well as alleged front companies in China and the United Arab Emirates.

Raisi condemns the sanctions, while the foreign ministry says the "train has still not derailed" in the negotiations.

The UAE urges Iran to provide reassurances on the peaceful nature of its nuclear programme.

In late June, two days of EU-brokered indirect talks in Doha between Iran and the United States conclude with "no progress made", the State Department says.

Britain, France and Germany urge Iran to accept a deal on the table since March and reverse steps away from compliance with the IAEA.

Early the next month, Iran says the United States bears responsibility for the failure of the Doha negotiations.

On a visit to Jerusalem, Biden on July 14 vows to use "all" American power to stop Tehran from acquiring nuclear weapons.

The next day, Iran says it is "more determined" to protect its own interests in the negotiations.

On July 26, EU foreign policy chief Josep Borrell says he has submitted a draft text of a deal, urging parties to accept it or "risk a dangerous nuclear crisis", writing in the Financial Times.

On August 1, Iran says it remains "optimistic" that the negotiation process will lead to "a logical and reasonable outcome".