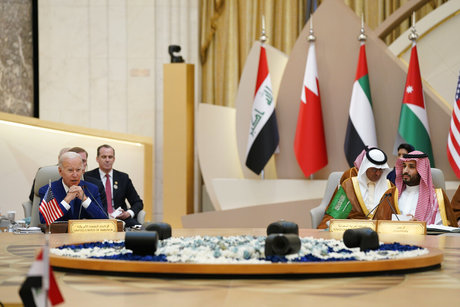 The Biden administration has approved two massive arms sales to Saudi Arabia and the United Arab Emirates to help them defend against Iran.

The more than $5 billion in missile defense and related sales follow President Joe Biden's visit to the Middle East last month, during which he met with numerous regional leaders in Saudi Arabia. Both Saudi Arabia and the UAE have been hit in recent months with rocket attacks from the Iran-backed Houthi rebel movement in Yemen.

Although Tuesday's approvals are for defensive weapons, they may be questioned by lawmakers who had supported Biden's decision last year to cut Saudi Arabia and the UAE off from major purchases of offensive U.S. arms because of their involvement in the war in Yemen.

The new sales include $3 billion for Patriot missiles for Saudi Arabia specifically designed to protect itself from rocket attacks by the Houthis, and $2.2 billion for high-altitude missile defense for the UAE.

"The proposed sale will improve the Kingdom of Saudi Arabia's capability to meet current and future threats by replenishing its dwindling stock of PATRIOT GEM-T missiles," the State Department said in its notice informing Congress of the sale.

"These missiles are used to defend the Kingdom of Saudi Arabia's borders against persistent Houthi cross-border unmanned aerial system and ballistic missile attacks on civilian sites and critical infrastructure in Saudi Arabia," the department said.

For UAE, the department said the sale would "support the foreign policy and national security of the United States by helping to improve the security of an important regional partner. The UAE is a vital U.S. partner for political stability and economic progress in the Middle East."

Early in his administration Biden had pledged to cut off or cut back weapons sales to both Saudi Arabia and the UAE because of their actions in Yemen.