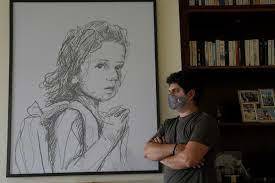 Lebanon marks two years Thursday since an apocalyptic blast in Beirut port killed over 200 people, destroyed a large chunk of the city and deepened a painful economic crisis.

Below is a glance at the legal and political battles that have raged ever since.

On August 4, 2020, one of history's biggest non-nuclear explosions destroys much of Beirut port and wrecks swathes of the capital.

The huge explosion leaves more than 200 people dead, over 6,500 injured and the city in a state of shock.

The tragedy strikes as Lebanon is mired in what the World Bank later calls one of the world's worst financial crises in 150 years.

Two days after the blast, French President Emmanuel Macron visits the ruined Gemmayzeh neighborhood, where he is greeted by residents sickened by their own political class, seen as corrupt and inept.

Macron calls for an international probe into the disaster, which President Michel Aoun rejects.

On August 8, thousands of people demonstrate against Lebanon's leadership.

The next day, a donor conference raises around $300 million in aid for the victims. The donors insist the money be distributed directly to the Lebanese people, not entrusted to the government.

At the end of the month, diplomat Mustafa Adib is named as Lebanon's new premier.

But on September 26, after weeks of political deadlock, he bows out.

He promises to form a government of experts to stop the economic collapse.

Diab stays on as caretaker PM until a new cabinet is formed.

A week later, the lead investigator into the explosion, Fadi Sawwan, charges Diab and three ex-ministers with negligence.

But the probe is soon suspended and a court removes Sawwan in February 2021.

In July 2021, the new magistrate in charge of the investigation, Tarek Bitar, takes steps towards indicting four former ministers but parliament stalls on lifting their immunity.

On July 15, Hariri steps down, having been unable to form a government.

The new government is shaken by demands from Hezbollah and Amal Movement for Bitar, investigating two ex-ministers from Amal, to be removed.

Bitar is forced to suspend the probe following a series of court challenges.

Hezbollah and its ally Amal call for demonstrations to demand Bitar's dismissal, accusing him of bias.

Seven people are killed in gun battles during the rally.

At the end of 2021, Bitar resumes his investigation but less than two weeks later he is forced to suspend work for a fourth time following more legal challenges.

In April, the International Monetary Fund announces a conditional deal to provide Lebanon with $3 billion in aid over four years.

Chile arrests a Portuguese man wanted in connection with the port blast.

Hezbollah and its allies lose their outright majority in May 15 parliamentary elections, in which independent candidates make record gains. Mikati is tasked with forming a new government.

In July, victims of the Beirut blast file a $250-million lawsuit against U.S.-Norwegian energy services company TGS over its alleged links to the ammonium nitrate that exploded in the port. TGS denies any responsibility.

Parts of Beirut port's huge grain silos, which withstood the explosion, collapse in a huge cloud of dust after a weeks-long fire that broke out when remaining grain stocks fermented and ignited in the summer heat.