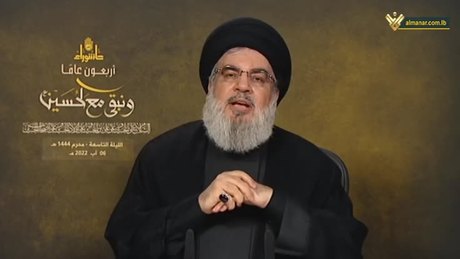 Hezbollah chief Sayyed Hassan Nasrallah on Saturday warned Israel against making a “miscalculation” towards Lebanon similar to the one he said it has made towards Gaza, where it has launched a major military operation against the Islamic Jihad group.

“We believe that the resistance will have the upper hand in this battle,” he added, noting that “it is clear that the enemy always goes to wrong calculations.”

“We’ve heard intimidation statements by the enemy against the resistance in Palestine and the resistance in Lebanon. It is bombing in Gaza and addressing Lebanon at the same time, but it is making wrong calculations,” Nasrallah went on to say.

He warned that “the enemy is making wrong calculations when it is addressing Lebanon.”

“It is making wrong calculations if it thinks that it can intimidate or scare us. Do no make a miscalculation towards Lebanon. Anything that you do and anything that you say cannot at all affect our will, morale and decision,” Hezbollah’s leader stressed.

He added: “We trust our God, we trust ourselves and we trust our strength. We also trust your weakness, frailness and cowardliness.”

“I advise the enemy that is sending these messages to stop sending them, because in Lebanon it should not expect at all that the resistance will stand idly by in the face of a certain aggression or a certain infringement on our rights,” Nasrallah went on to say.

“If he were the agriculture minister, we would have said that he has a mattock, but he is the finance minister,” Nasrallah said sarcastically.

“He threatened to wipe out the southern suburbs. You can say what you want and I will not respond to this threat. Days are between us and you know that today the resistance is stronger than ever,” Nasrallah added.

Alzheimer is common within the Shia

he added, noting that “it is clear that the enemy always goes to wrong calculations.”

He forgot the (in)famous "Law Kuntu a3lam" from 2006 which cost us $11 billions in destroyed infrastructure. 11 billions that were eventually stolen from our savings to pay for his miscalculations.

This patient doesn’t have Alzheimer’s disease, he has a selective memory… like those who practice taqiyya on a daily basis.

With the help PIJ is getting from Hezbollah and Hamas it can't lose.

God bless our Shia resistance and its blessed leader Sayyed Hassan Nasrallah for following up on what’s happening in Gaza hour by hour and for being in constant contact with our dear brothers in the leadership of the Islamic Jihad movement.

In doing so, our Sayyed is sending a message to the world at large: Our Shia resistance is here; it supports its brothers in Gaza; it will offer whatever words are needed to defeat the Israeli enemy and liberate Palestine.

Such a brave man making threats from the safety of his own bunker....