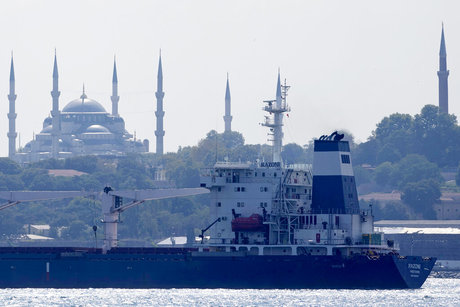 The Sierra Leonian-flagged Razoni ship, carrying 26,000 metric tons of corn for chicken feed that departed from Odesa last Monday will no longer dock in the northern Lebanese port.

According to Marine Traffic, it changed its status on Saturday to "order," meaning the ship was waiting for someone to buy the corn.

"All that I know is that the ship is no longer coming here," Tripoli Port director Ahmad Tamer said.

Ukraine's embassy in Beirut tweeted Monday that the corn's final buyer in Lebanon refused to accept the cargo due to delivery delay beyond a contractual limit and that the shipper was now looking for another buyer.

The shipment had been a grain of hope for the economically-shattered tiny Mediterranean nation, also suffering from a food security crisis. Soaring food inflation, wheat shortages, and breadlines have crippled a population, of which about half are food insecure, according to the United Nations World Food Program.