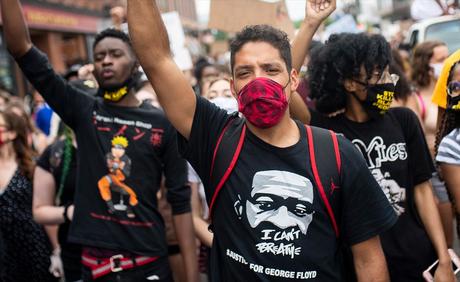 Their report comes as the U.N. Committee on the Elimination of Racial Discrimination (CERD) is due later this week to review Washington's record.

The committee comprises 18 independent experts who evaluate how countries are adhering to an international convention on eliminating all forms of racial discrimination, which the United States ratified in 1994.

HRW and ACLU said they hoped that the review would "direct the United States government to take immediate, tangible measures to dismantle structural racism."

They said the U.S. government had never adequately addressed the massive violations against black people during slavery and subsequent periods marked by exploitation, segregation and violence.

That legacy, they said, continues to be seen in economic, health, education, law enforcement, housing and other policies and practices.

The report points to a long line of statistics laying bare the negative effects felt by black people.

The average white family in the United States today, for instance, has roughly eight times the wealth of the average black family, the report said.

While black people and white people use drugs at similar rates, black people are five times more likely to be imprisoned for drug crimes, it found.

And U.S. police continue to kill black people and other minorities as much as 350 percent more frequently than their white peers, it said.

"Decades after the U.S. committed to end racial discrimination, systemic racism continues to infect our institutions," Jamil Dakwar, head of the ACLU's human rights program, said in a statement.

"The Biden administration has shown it can name the problem, but the time has come to take bolder action to radically transform these abusive systems and fully implement U.S. human rights obligations."

The CERD review of the United States will take place on Thursday and Friday, and the experts will publish their findings on August 30.