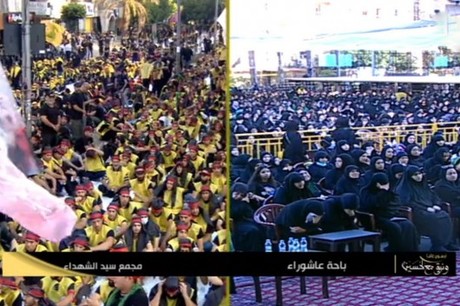 Shiite Lebanese marked Tuesday the holy day of Ashoura, one of the most emotional occasions in their religious calendar, commemorating the 7th century martyrdom of the Prophet Muhammad's grandson Imam Hussein.

With power split in Lebanon among the country's religious sects, Ashoura presents an opportunity for Lebanon's Shiites to show force.

Hezbollah chief Sayyed Hassan Nasrallah is scheduled to deliver a speech on the occasion.

Shiites represent over 10% of the world's 1.8 billion Muslims and view Hussein as the rightful successor to the Prophet Muhammad. Hussein's death in battle at the hands of Sunnis at Karbala, south of Baghdad, ingrained a deep rift in Islam and continues to this day to play a key role in shaping Shiite identity.

Over 1,340 years after Hussein's martyrdom, Baghdad, Tehran, Islamabad and other major capitals in the Middle East were adorned with symbols of Shiite piety and repentance: red flags for Hussein's blood, symbolic black funeral tents and black dress for mourning, processions of men and boys expressing fervor in the ritual of chest beating and sometimes self-flagellation with chains.

The largest Ashoura gathering is set to take place today, Tuesday, in the Iraqi city of Karbala, where Hussein is entombed in a gold-domed shrine. Thousands typically rush toward the shrine to symbolize their desire to answer Hussein's last cries for help in battle.

Pure heresy from a religious point of view for many reasons; one is that idolatry is forbidden in Islam, another one being that mutilation of the human body, even the bodies of non-Muslim enemies, is forbidden .

It is celebrated in order to commemorate the day when Moses ﷺ and his followers were saved from Pharaoh by God by creating a path in the Red Sea (The Exodus).