Nasrallah to Israel: Don't make a mistake over oil and gas issue 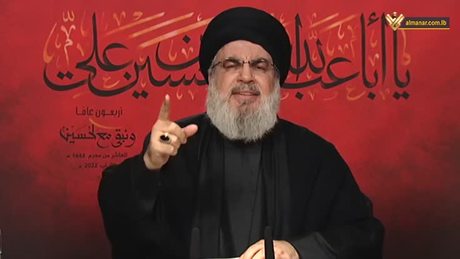 Hezbollah chief Sayyed Hassan Nasrallah on Tuesday warned Israel against “making a mistake towards the resistance in Lebanon” or over “the issue of oil and gas and the issue of the maritime border.”

“Don’t make a mistake by committing any aggression,” Nasrallah added, in a speech marking the last day of the Ashoura commemorations.

“I tell the Americans, who are presenting themselves as mediators although they are not, that we will not tolerate the looting of our resources and that we have reached the end of the line,” Nasrallah warned.

“We will go to the end of the road. Let no one try us, test us or bet on scaring us,” Hezbollah’s leader added, referring to his recent warnings that his group would use military means to prevent Israel from producing gas from its offshore rigs without an agreement with Lebanon.

Noting that Hezbollah is waiting for the answers that Israel will send to the Lebanese state through the U.S. mediator, Nasrallah told the Lebanese, “especially the axis of resistance,” that they “should be ready for all possibilities.”

“In this battle and in this juncture we are serious to the highest levels of seriousness,” he said.

Apparently referring to Israel’s recent threats to target Islamic Jihad officials in Lebanon, Syria and Iran, Nasrallah warned that “any attack on any person in Lebanon will not go without punishment and a response.”

Turning to the domestic situations, Nasrallah called for “the broadest solidarity to overcome the difficulties.”

“We seriously call for the formation of a government, especially that some are speaking of a presidential vacuum, and officials must truly feel the pains of the people, seeing as most officials in the country are distant from the people’s pains and are living in their ivory towers,” Hezbollah’s secretary-general added.

Knocking in open doors. Hezbollah do all they can to convince their blind followers that the upcoming negotiated settlement on sea border demarcation is due to their military pressure. That way they can celebrate another "divine victory", although their interference has been more of a nuicance to the real negotiators.

"Resistance" in all its forms is a lie, contrived by liars, in the sole interest of their deamons

Message from Nasrou. I will fight Israel for Iran until the last Lebanese. You have to admire his spunk.