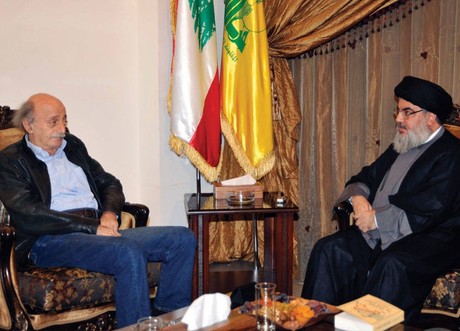 The meeting was held in the presence of MP Wael Abu Faour and ex-minister Ghazi Aridi.

Speaking to reporters after the meeting, Khalil said: "There was a common desire for this rapprochement, which has been dictated by the circumstances that the country is going through."

"We demonstrated a lot of domestic political, financial and social issues, and the meeting was rich, cordial and frank. We will hold further discussions in the coming days," Khalil added.

"We disagree over essential political topics but this doesn't prevent engaging in discussions," he said.

Responding to a reporter's question about Hezbollah's stance on the sea border demarcation negotiations with Israel, Khalil said Jumblat voiced "frank viewpoints" that Hezbollah "will take into consideration."

"This rapprochement is necessary," Khalil added.

Jumblat for his part described the meeting as "cordial and frank."

"We left aside the controversial issues and we thoroughly discussed the issues that we can agree on," he said.

"We will continue this dialogue," Jumblat added.

Al-Liwaa newspaper reported Thursday that Jumblat and Hezbollah's officials would discuss the living conditions and the economic situation in the country. It added that there would be no specific agenda for the meeting.

Meanwhile, an informed source told al-Akhbar newspaper that Jumblat, who has 8 MPs in the new parliament, has shifted to a new political equation at a sensitive moment, amid high chances of a nuclear agreement between the United States and Iran. The source told the daily that Jumblat's repositioning "has regional and international dimensions that go beyond the Lebanese scene."

Disgusting! Talking about stabbing Cedar Revolution principles in the back. Brain damaged anyone trust in invading militia to protect minority instead of democracy and rule of justice. Short vision that will cost heavily Druze as well as freedom, independence and dignity. Jumblat just sold the future of Druze and all Lebanese children to the Basij and permanent humiliation, poverty and hopeless pessimism.