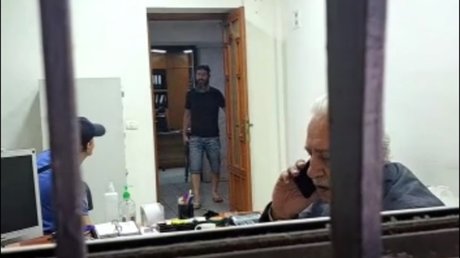 An eight-hour hostage crisis ended Thursday evening at Federal Bank's Hamra branch as an armed depositor turned himself in to security forces after the bank agreed to pay him a part of his deposit.

Around ten hostages, most of them bank employees, had been held by the man throughout the day.

"Bassam you are a hero!" cheering bystanders chanted outside the bank as the man and several hostages were escorted away by security forces.

Protesters at the scene had chanted "down with the rule of the banks," while others took to social media to express their support for the shaggy-bearded suspect wearing shorts and flip-flops.

Police could not immediately say whether the man would face charges.

The man -- 42-year-old food delivery worker Bassam al-Sheikh Hussein -- had "threatened to set himself on fire and to kill everyone in the branch, pointing his weapon in the bank manager's face," NNA said.

He said he stormed the bank because his father "was admitted to hospital some time ago for an operation and could not pay for it," NNA reported.

He said his brother had grabbed the weapon "from the bank and did not bring it with him."

A video circulating on social media in the morning showed two people negotiating with the armed man behind the bank's metal door.

He replied angrily, wielding the rifle in one hand and a cigarette in the other.

Lebanon has been mired in an economic crisis for more than two years, since the market value of the local currency began to plummet and banks started to enforce draconian restrictions on foreign and local currency withdrawals.

"Depositors want their money, and unfortunately their anger explodes in the face of bank employees because they cannot reach the management."

The local currency has lost more than 90 percent of its value since the onset of the crisis.

Inflation is rampant, electricity is scarce and, according to the United Nations, around 80 percent of Lebanese live in poverty.

Many Lebanese blame the country's political elite, wealthy and aged figures entrenched for decades. They cite corruption and also blame the banking sector for the country's economic collapse.

International donors say aid to the bankrupt country is conditional on reforms, which politicians have so far resisted.

"A depositor is not taking people hostage. It's bank owners and their friends in the ruling militias who are taking an entire people hostage," economist Jad Chaaban said on his Facebook page.

The armed depositor fired three warning shots during the standoff. Local media reported that he had $210,000 stuck in the bank. According to TV networks, the man agreed to free the hostages after the bank agreed to pay him $35,000 out of his $210,000 deposit. MTV said the man's brother arrived at the bank and received the money before the hostage-taker agreed to turn himself in.

The man "threatened to set himself on fire and to kill everyone in the branch, pointing his weapon in the bank manager's face," said the National News Agency.

A customer at the bank who fled the building earlier in the day told local media that the man was demanding to withdraw $2,000 dollars to pay for his hospitalized father's medical bills. However, quoting a negotiator, MTV said the man rejected an initial $10,000 proposed to him by the bank.

Witnesses claimed that the depositor had been trying since days to withdraw from the bank the amount for a surgical operation for this father and that the bank had refused to hand him the money.

Army soldiers, police officers from the Internal Security Forces, and intelligence agents surrounded the area, as the armed depositor asked the armed forces to leave the place, while citizens gathered at the place, some of them supporting the depositor.

Many supporters considered that citizens have the right to withdraw their money and that authorities have left the depositors with no other choices.

"We could have been in his position," a citizen said.

"This is not the first such case, similar incidents keep happening, we need a radical solution," George al-Hajj, who heads Lebanon's bank employees union, told AFP outside the bank.

"Depositors want their money, and unfortunately their anger explodes in the face of bank employees because they cannot reach the management."

Those who are against the use of violence still decried the economic situation and stressed the right of the Lebanese to withdraw their savings, protesting the banks policies.

The country today is suffering from the worst economic crisis in its modern history, where three-quarters of the population have plunged into poverty.

Citizens who have accounts in dollars have limited access to their deposits amid an unprecedented collapse of the Lebanese pound.

These dollars trapped in the banks are now locally known as "lollars".

Months ago, a depositor also detained dozens of employees and clients in a bank in the town of Jib Jennine in West Bekaa, and then turned himself in to security forces after receiving his money.

"What led us to this situation is the state's failure to resolve this economic crisis and the banks' and Central Bank's actions, where people can only retrieve some of their own money as if it's a weekly allowance," said Dina Abou Zor, a lawyer with the advocacy group Depositors' Union who was among the protesters. "And this has led to people taking matters into their own hands."

Dania Sharif said her sister, who serves coffee and tea at the bank, was among the hostages and had not been harmed by the gunman. "He just wants his money," Sharif said, standing outside the bank. "I will not leave until my sister comes out."

I’m surprised this doesn’t occur on a daily basis, because it should!

Welcome to the jungle, it gets worse here everyday
You learn to live like an animal in the jungle where we play
If you got a hunger for what you see, you'll take it eventually
You can have anything you want, but you better not take it from me

In the jungle, welcome to the jungle
Watch it bring you to your knees
I wanna watch you bleed

Crime pays, but the real criminals are the bankers who stole our savings. They should all be lined up and executed with their families as well as the banks major shareholders who profited from the criminal deals they had with the BDL.

In Lebanon, Those can shout loudest get their rights. Actually, he didnt get extra rights. He got 1/6th of his deposit which is the going rate of lollar check. He could have simply sold a bankers check.

At any rate, I hope his father gets better, to have a son so dedicated is worth living for