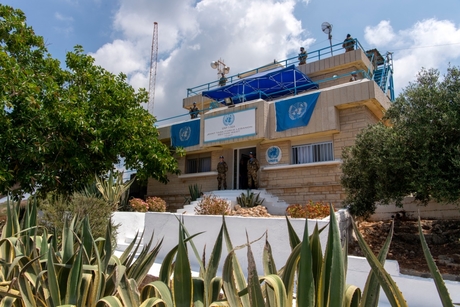 UNIFIL Head of Mission and Force Commander Major General Aroldo Lázaro on Thursday chaired a Tripartite meeting with senior officers from the Lebanese and Israeli armies at the U.N. position in Ras al-Naqoura, UNIFIL said.

“In today’s Tripartite discussions the Force Commander focused on incidents along the Blue Line, continuing air violations, as well as other developments and issues within the scope of the U.N. Security Council resolution 1701 and other related resolutions,” UNIFIL said in a statement.

In his opening remarks, Lázaro noted that the parties’ engagements through UNIFIL’s established liaison and coordination mechanism, have contributed to preventing any escalation along the Blue Line: “These instruments have again demonstrated their value.”

“UNIFIL’s liaison teams maintain open lines of communication between the parties aimed at deconflicting operational activities and rapidly responding to incidents when they occur,” said the UNIFIL head. “I continue to encourage you to avail of this valuable deconfliction asset when operating along the Blue Line,” he added.

In addressing incidents along the Blue Line, the UNIFIL chief urged both parties to avoid any action which could put the cessation of hostilities at risk: “Blue Line stability should not be taken for granted. Belligerent rhetoric escalates tension and adds to the feeling of apprehension among the local populations.”

And he added: “I encourage both parties to take full advantage of this forum to find practical and positive solutions as an initial step aimed at resolving substantive issues in line with Security Council Resolution 1701.”

Since the end of the 2006 war in south Lebanon, regular Tripartite meetings have been held under UNIFIL’s auspices as an “essential conflict management and confidence-building mechanism.” According to UNIFIL, these meetings have been welcomed by the U.N. Security Council for its constructive role in facilitating coordination and in de-escalating tensions.