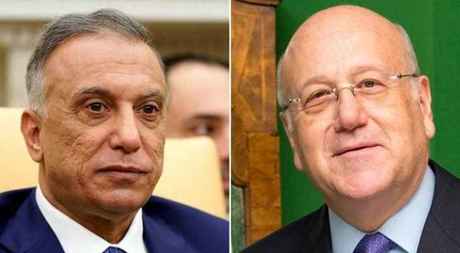 Caretaker Prime Minister and PM-designate Najib Mikati on Thursday announced that the Iraqi government has agreed to a request from him for extending the supply of Lebanon with fuel for another year with the same terms and conditions.

The fuel will go to the cash-strapped national electricity company Electricite du Liban (EDL) to power some of its plants.

In a statement issued by his office, Mikati thanked the Iraqi government and his Iraqi counterpart Mustafa al-Kadhemi in person for their “concern about Lebanon and supporting it to overcome the difficult circumstances it is going through.”

“Relations between Lebanon and Iraq will remain firm as they have been throughout history and brotherly cooperation between the two countries will continue,” Mikati added.

Lebanese Energy Ministry sources had warned that “the Iraqi fuel reserves will expire by the end of August,” cautioning that “Lebanon might be plunged into total darkness.”

Iraq signed an agreement in July 2021 to give cash-strapped Lebanon one million tons of fuel oil to help keep the lights on as the country grapples with power cuts up to 23 hours a day during an unprecedented economic crisis.

For the past year, Lebanon's power plants have depended on the deal with Iraq to produce one to two hours of electricity per day.

Residents in the poverty-stricken country largely rely on expensive private generators for power the rest of the time.

The Iraqi oil cannot be used directly by Lebanon's power stations, so Lebanon will continue to buy compatible fuel from other providers which will receive the Iraqi oil in exchange.

At the time of signing, last year's deal was worth $300-$400 million, Raymond Ghajar, the Energy minister at the time had said.

An Iraqi ministerial delegation is expected to visit Beirut shortly to agree on the in-kind services that Baghdad wants in return for the fuel, Fayyad said.

Iraq is a member of the Organization of the Petroleum Exporting Countries (OPEC) but suffers from its own electricity shortages.

Lebanon is battling one of the planet's worst economic crises since the 1850s, and the state-run electricity company faces dire cash shortages.

So, basically the same 1 to 2 hours, but now even more expensive. Well done aounis. Could have spent the almost 1 billion dollars to build some more efficient power plants instead of this policy of almost blackout with no end in sight, since no there is no vision.