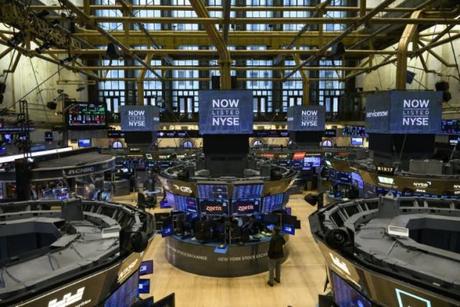 The U.S. producer price index (PPI) rose by 9.8 percent year-on-year in July, the Labor Department calculated, down from 11.3 percent in June. And on a monthly basis, the index actually fell for the first time in over a year.

Coming after better-than-expected consumer price data the day before, the PPI numbers cheered investors as they suggested that the Fed could begin taking its foot off the pedal somewhat when it comes to raising interest rates to dampen inflation, traders said.

Wall Street was higher on the news, while European markets, which had been in the red earlier in the session, were mostly able to end the day in positive territory.

"The key takeaway from the report is the moderation seen in the year-over-year inflation readings. That follows on the heels of the pleasing CPI data and it fits neatly within the supportive peak inflation narrative that has been a boon for investor sentiment," said Patrick O'Hare, analyst at Briefing.com.

Nevertheless, leading Fed officials have already sought to temper expectations that the monetary policy tightening cycle could be coming to a complete halt.

The head of the Minneapolis Federal Reserve Bank, Neel Kashkari, warned: "We are a long way away from saying that we're anywhere close to declaring victory."

The chief of the Chicago Federal Reserve Bank, Charles Evans, said rates will continue to rise for "the rest of this year and into next year."

"Investors are certainly in a more upbeat mood as the relief from the U.S. inflation data ripples through the markets," said OANDA analyst Craig Erlam.

However, "Fed policymakers remain keen to stress that the tightening cycle is far from done and a policy U-turn early next year is highly unlikely," Erlam said.

After the Fed already raised interest rates by three-quarters of a percentage point twice this year, the financial markets fear that a further hike of the same magnitude could choke off economic recovery.

"Though the probability of another 75-basis-point hike in September has fallen sharply, the debate about a hike of 50 or 75 basis points will continue, and the Fed will be keen to keep that debate going, until we get the next consumer price inflation and employment reports," said Forex.com analyst Fawad Razaqzada.

Investors will therefore be listening out for further comments from policymakers over the next weeks to better gauge the likely pace of further rate hikes, traders said.

On the oil market, crude prices climbed as U.S. recession fears eased -- but remained around six-month lows and below the levels seen before the Ukraine war.

Tokyo - Nikkei 225: Closed for a holiday