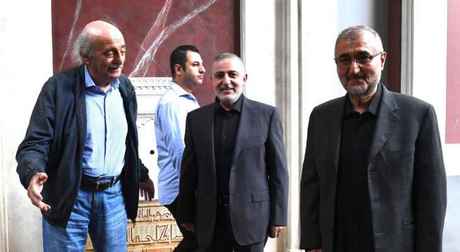 Hezbollah's officials informed Jumblat that a war with Israel is possible, "if Israel insists on depriving Lebanon of its rights."

They assured the PSP leader that the drones launched by the group towards the Karish field are for Lebanon's interest, as Jumblat reportedly asked if the drones' aim was to strengthen Iran's position in its nuclear negotiations.

"The drones were sent to improve Lebanon's position in the border demarcation negotiations and to pressure for allowing Lebanon to extract oil and gas from its resources," Hezbollah's delegation responded.

The delegation reportedly said that Hezbollah will decide how to react based on the response of U.S. mediator Amos Hochstein.

As for the next President, Jumblat stressed the need to elect a non-provocative consensual president who does not belong to the March 8 Alliance and who can be accepted by the other parties, the reports said. Hezbollah responded that the subject needs further consultations between the main political parties.

Jumblat who had met with Safa and Khalil on Thursday will hold further discussions with them in the coming days.

God bless Walid Jumblat for being a socialist and progressive and for realizing that fighting corruption starts with adopting our Shia resistance stances on foreign policy, economic reforms, and support for human rights. Mr. Jumblat has finally realized that resistance is the only effective way to govern Lebanon and has expressed his full willingness to be part of this phenomena.

Every leader, every warlord, every politician, and every Lebanese citizen who has submitted to the resistance has been rewarded and is now in a better place.

To us Shia, resistance is a way of life. Sacrifice is ingrained in us and in our faith. from Karbala to Aleppo, from Yemen to Bahrain, from Beirut to Jerusalem we all chant: Shia Shea Shia !!!

Come on dude the guy has been sarcastic since the beginning! he is no supporter of Hezbollah...

Make up your minds. In the headline it says "probable" whereas in the actual quote itself it says "possible".
So once again Hizballah terrorist organisation is doing all it can to drag the Government of the Republic of Lebanon into a war, that most of the people don't want, and the terrorists will be quick to make sure that the government complains to the UN about "Israeli provocation".
Yet, as usual, the government continues to allow them to get away with their provocations.

Unlike your "innocent" state of israel that slaughters children for fun while existing on stolen land. You devils provoke every day with the blessing of your government, how come you don't complain about that? Deceiver just like the satan you follow.

Last weekend it was erring Islamic Jihad rockets which exploded almost immediately upon launch which killed those children.
Over the years if Islamic Jihad and Hamas rockets had not been fired at settlements and towns in Isrzel, then Israel would have had no reason to reciprocate.
When firing starts, Israelis know that the civilian population can go into shelters, whereas Gazan civilians have had no such precautions made for them, and as seen rockets sometime explore prematurely causing unnecessary deaths, which of coiurse they can blame on Israel.

Hamas and islamic jihad are made up of refugees from the very towns that they are shooting those rockets at. Their towns that are stolen by your side, the deceivers. And just because israel says that those kids were killed by the islamic jihad, it doesn't mean its true. Let me guess, you also believe shereen abu akleh was killed by Palestinian fire and that Gaza and south lebanon attacked themselves with israeli advanced bombs? You know the truth yet you choose to spread lies. May all the victims of israeli state terror haunt you in your sleep and may you be gathered with the opressors on the day of judgement just like you side with them today.

Now I get why the Druze is classified as an offshoot if Shiism….

Yup. All branches of shiism go against the Islamic teachings. The druze just decided to go way further than the 12ers who had already strayed far from Islam.

Druze is classified as an offshoot of every other religion! it is like magic mushrooms!

Lebanon negotiating with Israel (indirectly) while at the same time saying it's probable it will go to war against Israel. Seems inconsistent to do both concurrently.