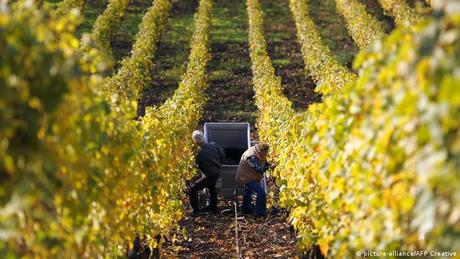 Forced to start picking grapes much earlier than normal because of torrid temperatures, winemakers across France are worrying that grape quality will suffer from the climate-induced stress.

The exceptionally dry conditions spread from the rugged hills of Herault along the Mediterranean, where picking is already underway, to the normally verdant Alsace in the northeast.

Waves of extreme heat this summer accelerated grape maturation, meaning harvests had to begin one to three weeks early or more -- in Languedoc-Roussillon, some growers even started in late July.

"We were all a bit surprised, they began maturing very rapidly these past few days," said Francois Capdellayre, president of the Dom Brial cooperative in Baixas, outside Perpignan.

He said the shears came out on August 3 for the region's typical muscat grapes, followed by chardonnay and grenache blanc.

"In more than 30 years I've never started my harvests on August 9," said Jerome Despey, a vineyard owner in the Herault department.

Like other farmers, French winegrowers have been grappling for years with increasingly common extreme weather including spring freezes, devastating hailstorms and unseasonably heavy rains.

But this summer's combination of a historic drought -- July was the driest month on record since 1961 -- and high temperatures are taking a particular toll on vineyards.

Only 10 percent of France's winegrowing parcels use artificial irrigation systems, which can be difficult or prohibitively expensive to install.

And while grape vines are more hardy than many other crops, with roots that descend deep into the ground over years of growth, even they can withstand only so much.

When water is scarce, the vines suffer "hydric stress" and protect themselves by shedding leaves and no longer providing nutrients to grapes, stunting their growth.

In Alsace, "we haven't had a drop of rain in two months," said Gilles Ehrhart, president of the AVA growers' association.

"We're going to have a very, very small harvest" after picking begins around August 26, he said.

And when temperatures surpass 38 degrees Celsius (100 Fahrenheit), "the grape burns -- it dries up, loses volume and quality suffers" because the resulting alcohol content "is too high for consumers," said Pierre Champetier, president of the Protected Geographical Indication (PGI) for the Ardeche region south of Lyon.

Champetier began harvesting Monday, when "40 years ago, we started around September 20," he said.

Now he worries that global warming will make such premature harvests "normal."

Some winemakers are still holding off in hopes of rain in coming weeks, such as red grape producers in Herault, where harvests should begin as usual in early September.

In Burgundy, which two years ago saw its earliest harvest debut -- August 16 -- in more than four centuries of keeping track, picking will start at cellars in Saone-et-Loire around August 25.

But just south in the Rhone Valley, "the heatwave has accelerated maturation by more than 20 days compared to last year," according to the Inter-Rhone producers' association.

They nevertheless hope grape quality will hold up, as do Champagne growers in the northeast, where harvesting will begin late August -- though yields are set to fall nine percent year-on-year because of a brutal spring cold snap and hailstorms.

Bordeaux plans to kick off on August 17 with the grapes for the region's sparkling wines -- appreciated by connoisseurs but just one percent of overall production.

Next will come "dry whites, sweet whites and then the reds," said Christophe Chateau of the CIVB producers' group, though the precise dates will be set only next week.

But he warned that even rainfall from storms forecast across France starting this weekend will "not be enough" to ensure a "beautiful vintage."