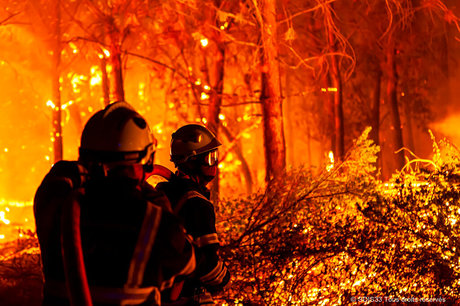 Blazes that have torched tens of thousands of hectares of forest in France, Spain and Portugal have made 2022 a record year for wildfire activity in southwestern Europe, the EU's satellite monitoring service said Friday.

Amid a prolonged heatwave that saw temperature records tumble, the Copernicus Atmosphere Monitoring Service (CAMS) said that France had in the last three months reached the highest levels of carbon pollution from wildfires since records began in 2003.

CAMS said the daily total fire radiative power -- a measure of the blazes' intensity -- in France, Spain and Portugal in July and August was "significantly higher" than average.

"We have been monitoring an increase in the number and resulting emissions of wildfires as heatwave conditions have exacerbated fires in southwestern France and the Iberian Peninsula," said Mark Parrington, CAMS senior scientist.

"The very extreme fire danger ratings that have been forecasted for large areas of southern Europe mean that the scale and intensity of any fires can be greatly increased, and this is what we have been observing in our emissions estimates and the impacts it has on local air quality."

CAMS released satellite imagery showing a plume of smoke from the huge in southwestern France extending hundreds of kilometers over the Atlantic.

France has received help battling the latest blaze -- which is 40-kilometres (25 miles) wide and which forced some 10,000 people to evacuate the region -- in the form of 361 firefighters from European neighbors including Germany, Poland, Austria and Romania.

Scientists say heatwaves such as the exceptional hot and dry spell over western Europe are made significantly more likely to occur due to manmade climate change.