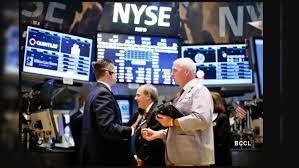 Five major Chinese companies including two of the country's largest oil producers will delist from the New York Stock Exchange, the firms said in filings on Friday.

Sinopec and PetroChina -- two of the world's biggest energy firms -- will apply for "voluntary delisting" of their American depositary shares, the companies said in separate statements.

The Aluminum Corporation of China, also known as Chalco, as well as China Life Insurance and a Shanghai-based Sinopec subsidiary, announced similar moves.

The delisting plans come as tensions between Beijing and Washington climb over U.S. House Speaker Nancy Pelosi's visit last week to Taiwan, which China claims as part of its territory.

Beijing has raged against the visit, staging unprecedented military drills around the self-ruled island and suspending cooperation with the United States on issues ranging from climate change to fighting drug smugglers.

The five companies are on a list of firms published by the U.S. Securities and Exchange Commission that faced delisting from Wall Street if they did not comply with new audit requirements.

All five companies said in separate statements that they expected to stop trading on the NYSE by early September.

The new requirements came into effect late last year, at a time when Chinese authorities were expressing reservations about China-based companies listing in the United States.

The five companies on Friday all pointed to the costs of maintaining the U.S. listings as well as the burden of complying with reporting obligations as factors behind the decision.

China's securities regulator on Friday said the moves were made by the companies "out of their own business considerations."

The delistings "will not affect the companies' continued use of domestic and foreign capital markets for financing and development", the regulator said in a statement.

The U.S. Congress in 2020 passed a law specifically targeting Chinese companies under which the Public Company Accounting Oversight Board (PCAOB) must be able to inspect audits of foreign firms listed on U.S. markets.

Mainland Chinese and Hong Kong companies are notorious for not submitting their financial statements to U.S.-approved auditors.

The law therefore puts them at risk of delisting, and its implementation comes at a time when Chinese authorities have expressed reservations in recent months about China-based companies listing in the U.S.

Chinese e-commerce giant Alibaba is among the latest batch of firms added to the list of more than 250 companies at risk of delisting under the rules.

The market heavyweight saw its Hong Kong stocks sink earlier this month after it was put on the list, dragging the Hang Seng Tech Index with it.

In leaving the U.S. market, Chinese companies are giving up an investor base like no other in the world -- with $52.5 trillion in assets under management, compared to $7.1 trillion in China, according to a 2020 study by management consulting firm McKinsey and Company.