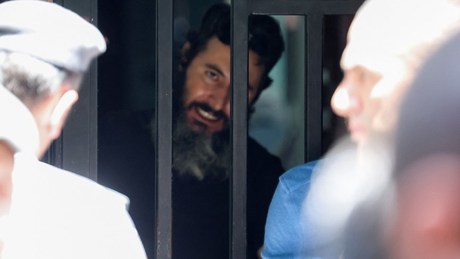 Bassam al-Sheikh Hussein, the armed depositor who took hostages Thursday at Federal Bank’s Hamra branch before turning himself in, has started a hunger strike, al-Jadeed TV reported on Friday.

“In a phone call with his lawyer, he threatened to hang himself unless he is released as per the agreement made with him” by authorities, the TV network added.

It later reported that Federal Bank has filed a lawsuit against the man and that the file will be referred to public prosecution.

The 42-year-old food-delivery driver surrendered after a seven-hour standoff in return for getting $35,000 of his money and promises that he would only be questioned then set free.

Like most people in Lebanon, Hussein had no access to his money because of banks' informal controls on flows of money. He had $210,000 at Federal Bank in Beirut and struggled to withdraw some to pay his father's medical bills and other expenses.

In January, a coffee shop owner withdrew $50,000 trapped in a bank in eastern Lebanon after taking employees hostage and threatening to kill them. He was released two weeks later.