February 14, 1989: The fatwa against Salman Rushdie 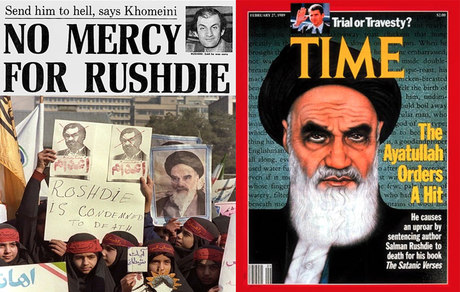 Friday's knife attack on Salman Rushdie comes more than 33 years after the fatwa against him by Iran's supreme leader Ayatollah Ruhollah Khomeini, in which he sentenced him to death.

On February 14, 1989 Khomeini called for him to be killed for writing "The Satanic Verses", which the cleric said insulted Islam.

In a fatwa, or religious decree, Khomeini urged "Muslims of the world rapidly to execute the author and the publishers of the book" so that "no one will any longer dare to offend the sacred values of Islam."

Khomeini, who was 89 and had just four months to live, added that anyone who was killed trying to carry out the death sentence should be considered a "martyr" who would go to paradise.

A $2.8-million bounty was put on the writer's head.

For almost 13 years he moved between safe houses under the pseudonym of Joseph Anton, changing base 56 times in the first six months. His solitude was worsened by the split with his wife American novelist Marianne Wiggins, to whom "The Satanic Verses" are dedicated.

"I am gagged and imprisoned," he recalled writing in his diary in his 2012 memoir, "Joseph Anton".

"I can't even speak. I want to kick a football in a park with my son. Ordinary, banal life: my impossible dream."

The book is set by turns in the London of Conservative British prime minister Margaret Thatcher and ancient Mecca, Islam's holiest site.

It centers on the adventures of two Indian actors, Gibreel and Saladin, whose hijacked plane explodes over the English Channel.

They re-emerge on an English beach and mix with immigrants in London, the story unfolding in surreal sequences reflecting Rushdie's magic realism style.

The book was deemed blasphemous and sacrilegious by many Muslims including over references to verses alleged by some scholars to have been an early version of the Koran and later removed.

These verses allow for prayers to be made to three pagan goddesses, contrary to Islam's strict belief that there is only one God.

Controversially, Rushdie writes of the involvement of a prophet resembling the founder of Islam, Mohammed.

This prophet is tricked into striking a deal with Satan in which he exchanges some of his monotheistic dogmatism in favor of the three goddesses. He then realizes his error.

Khomeini and others insist he had depicted the prophet irreverently.

In October 1988, Indian Prime Minister Rajiv Gandhi banned the import of the book, hoping to win Muslim support ahead of elections. Some 20 countries went on to outlaw it.

In January 1989, Muslims in Britain's northern city of Bradford burned copies in public.

There were protests in Europe, and London and Tehran broke off diplomatic relations for nearly two years.

The author tried to explain himself in 1990 in an essay titled "In Good Faith" but many Muslims were not placated.

Rushdie gradually emerged from his underground life in 1991, but his Japanese translator was killed in July that year.

His Italian translator was stabbed a few days later and a Norwegian publisher shot two years later, although it was never clear the attacks were in response to Khomeini's call.

In 1993, Islamist protesters torched a hotel in Sivas in central Turkey, some of whom were angered by the presence of writer Aziz Nesin, who sought to translate the novel into Turkish. He escaped but 37 people were killed.

In 1998, the government of Iran's reformist president Mohammad Khatami assured Britain that Iran would not implement the fatwa.

But Khomeini's successor, Ayatollah Ali Khamenei, said in 2005 he still believed Rushdie was an apostate whose killing would be authorized by Islam.

Many Muslims were furious when Rushdie was knighted by Queen Elizabeth II in 2007 for his services to literature.

Iran accused Britain of "Islamophobia", saying its fatwa still stood, and there were widespread Muslim protests, notably in Pakistan.

Rushdie was by then living relatively openly in New York where he moved in the late 1990s, and where his recent novels are set.

After many years living in the shadows, he became something of a socialite and is seen by many in the West as a free speech hero.

Until Friday's knife attack, he had very much resumed a normal life.