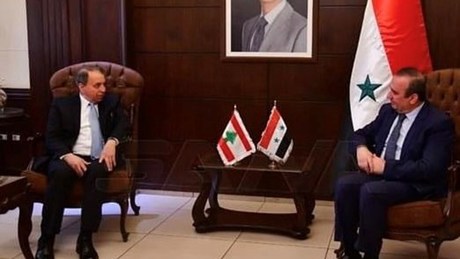 Caretaker Minister of the Displaced Issam Sharafeddine arrived Monday in Syria to discuss with Syrian authorities the repatriation of the Syrians refugees.

Accompanied by a Lebanese delegation, Sharafeddine met with Syrian officials including the Minister of Interior and Local Administration and Environment Minister Hussein Makhlouf.

The two sides discussed a plan aiming at returning the Syrian refugees to their country in "a safe and dignified" way.

Makhlouf said after the meeting that "Syria's doors are open for the refugees' return" and that the state is ready to provide them with everything they need, from transportation to hospitalization and education.

"Syrian authorities will secure water and electricity to the liberated areas and will provide shelters for those whose homes have not been rebuilt yet," Makhlouf added.

Sharafeddine had earlier announced that Lebanon is working on a plan to repatriate 15,000 Syrian refugees to Syria every month.

He said that shelters will be established to receive the displaced in their villages in Syria, while the UNHCR and rights groups considered that the repatriation to Syria would be unsafe.

If we had a real government & foreign minister we would have rightfully gotten billions for taking care of Syrian refugees and teaching them democracy and civility so they can make a positive change once back in Syria. Turkey got billions from Europe as these refugees would have cost significantly more to Europeans if they reached their shores. Lebanon rightly deserves at least $25 per day for every Syrian temporary refugee in Lebanon. This is over $10 billion per year. FPM has instead used refugees as a cash cow to divert millions to its cronies. Lebanon should request resolution these these funds be earmarked as priority payment from any Syria donor conference, counting every day they remain in Lebanon. This will insure Assad would want them back as soon as possible. Also, why not learn from US and UAE and offer citizenship to 1,000 students with highest score whether Syrian, Palestinian or any refugee or kids of Asian and African foreign workers?