Despite Everything: International legal conference held in Beirut 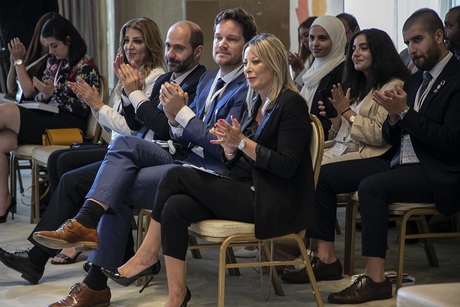 The Lebanon Law Review and the German NGO Konrad Adenauer Stiftung, Rule of Law Program have organized an international legal conference in Beirut to discuss the digitization in the fight against corruption and the digitization of law in practical business practices.

More than 200 participants, including members of Parliament, international experts, and local experts have attended the conference, Lebanon Law Review said in a statement.

Below is the full text of the statement as received by naharnet:

"Despite everything, an international legal conference titled 'The Digitization & Future of Law' was held at the Lancaster Plaza in Beirut on Friday, August 12, 2022. The conference was organized by the Lebanon Law Review in collaboration with Konrad Adenauer Stiftung, Rule of Law Program. The conference was attended by various international and local experts, including members of parliaments, politicians, professionals, and academics. The overall turnout of the conference was 200+ high-caliber attendees.

The main purpose of the conference was to encourage and support those that believe in solving current problems, believe in the rule of law, and those that are willing to work for it now more than ever.

The conference was officiated by MP Dr. Ghada Ayoub, Mr. Philipp Bremer Director of the Konrad Adenauer Stiftung Rule of Law Programme MENA, and Mr. Antoine Kanaan, the Editor in Chief of the Lebanon Law Review and the Director of HAQQ."

This conference should be followed by compensating victims with dual passports from Iranian Frozen Funds after Hizbollah (Iran's Foreign Legion) assassination conviction in international courts and Nassaralah publicly admittance (recorded evidence) that his funds are from the criminal Iranian Regime. If Lebanese lawyers cannot win this obvious case in international courts, they should just go home and find another job. Shame on Lawyer syndicate for leaving these victims destitute and without justice in their day of need instead of setting up a Task Force targeted for these lawsuits! Truly we live in Banana Republic with HizbIran imposing the law of jungle via its Useful Idiots from FPM to Marada and others who sold Lebanon for 30 pieces of silver!

"International Law" is the name of the Pentagon's new series of predator-reaper drones featuring the ability to strike non-white targets autonomously.