Aoun calls on judiciary to confront 'Salameh and partners' 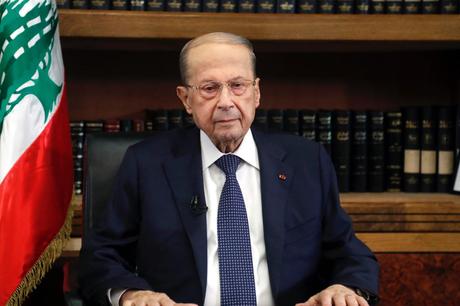 President Michel Aoun on Tuesday called on the judiciary to confront “anyone restraining its justice, at the central bank as well as in the Beirut port blast case.”

In a statement addressed to the judicial authority, the president reminded that on June 9, the relevant judicial authorities “charged Central Bank Governor Riad Toufic Salameh and his partners with dangerous financial crimes, specifically the crimes of embezzlement, falsification, the use of forged documents, money laundering, illicit enrichment and tax evasion.”

“Ever since, the concerned judges have shared responsibility evasion without filing a lawsuit according to legal norms, which pushes me, from my position and role as the head of the state and under my constitutional oath, to call on the judiciary to fully liberate itself from any inducement or intimidation,” Aoun added.

“I call on the judiciary to confront anyone restraining its justice at the central bank as well as in the Beirut port blast case,” he went on to say.

Addressing judges, the president added: “Rise up for your dignity and authority and do not fear those who have influence.”

Salameh is no saint but any developing country would have been extremely fortunate for a Central Bank Governor that stabilized currency for 20 years, a most important catalyst for investment and economic growth. With 7% GNP growth after Cedar Revolution, increase in wages and real estate value Lebanon was on path to become again a center for banking, commerce, education, innovation and regional headquarter for major firms. All changed with HizbIran 2006 War to protect Iranian arms, destroy our independence and rule of law. This followed by 2 years Hizb and Berri blocking government and destroying Downtown Beirut. Then electing puppet Aoun who sold Lebanon and our dignity for 30 pieces of silver. As Michel Aoun Faustian deal was tasked with destroying Christian presence so this other Useful Idiot Ghada Aoun is tasked with destroying all capital in Christian and Sunni hands. Has she ever prosecuted Hizb’s criminal acts? Disgusting!

Ana zing how he doesn't bring up the electricity file and prosecute the corruption and incompetence of that sector.