Aoun says keeping Syrians in Lebanon would be a 'crime' 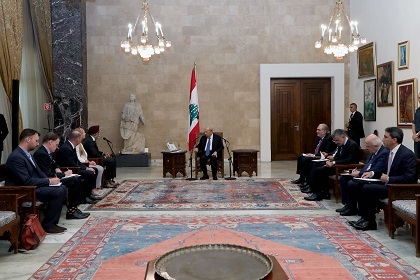 President Michel Aoun warned Wednesday that “the effort of some countries to integrate the displaced Syrians present in Lebanon into the Lebanese society is a crime that Lebanon will not accept no matter what happens.”

“Lebanon is preparing a legal study that will be submitted to the U.N. about the issue of Syrian displacement, and we hope the friendly countries will support us, especially that the current situations in Syria allow for securing the return of the displaced to their country,” the president added.

“Lebanon can no longer bear the economic, social, health and security burdens resulting from the presence of around 1.5 million displaced Syrians on its soil,” Aoun went on to say.

but your master, bashar, does not want them back.

Aoun assumes Lebanese are stupid! If we had an effective president we would have rightfully gotten billions for taking care of Syrian refugees and teaching them democracy and civility so they can make a positive change once back in Syria. Turkey got billions from Europe as these refugees would have cost significantly more to Europeans if they reached their shores. Lebanon rightly deserves at least $25 per day for every Syrian temporary refugee in Lebanon. This is over $10 billion per year. FPM has instead used refugees as a cash cow to divert millions to its cronies. Lebanon should request resolution for these funds to be earmarked as priority payment from any Syria donor conference, counting for every day Syrian refugees remain in Lebanon. This will insure Assad would want them back as soon as possible. Also, why not learn from US and UAE and offer citizenship to 1,000 students with highest score whether Syrian, Palestinian or any refugee or kids of Asian and African foreign workers?

Agreed, let’s ship Nadia El Shami’a and her children back to Syria.