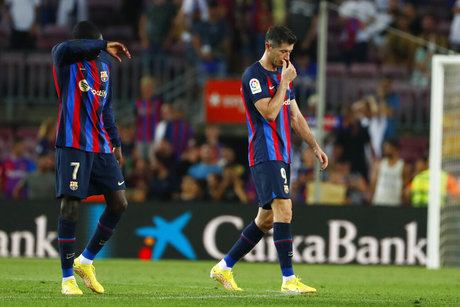 The expectations were high for Barcelona coming into the new season.

The club's financial maneuvers allowed for some high-profile signings that significantly boosted the squad after a trophyless campaign without Lionel Messi. The new players performed well in the preseason and Barcelona president Joan Laporta said the club would meet the Spanish league's strict financial fair play regulations.

Barcelona was back in its place, seen as a reference in world soccer again, Laporta boasted a few days before the league opener.

But it didn't take long for the hype to turn into more disappointment, and the Catalan club enters the second week of the season reeling and looking for ways to rebound. Another setback in a tough visit to Real Sociedad on Sunday could leave the club in a deep hole early on.

Laporta was not able to register all the new signings as he had expected ahead of the opener, and on the field the team struggled yet again, beginning its league campaign with a 0-0 home draw against Rayo Vallecano at the newly renamed Spotify Camp Nou.

"I understand the disappointment. We had generated a lot of expectations," Barcelona coach Xavi Hernández said. "It's disappointing but we have to be patient. We have faith in the project and we will keep working."

To make it worse, Barcelona's closest rivals all won their openers, with defending champion Real Madrid defeating promoted Almería and Atlético Madrid routing Getafe, both in away matches.

It won't help that Barcelona will have to face Sociedad without veteran midfielder Sergio Busquets, who was sent off in stoppage time against Rayo. It was also unclear if newly signed defender Jules Koundé would be allowed to be registered in time. Of the team's top signings, only Robert Lewandowski and Raphinha were added to the squad ahead of the opener.

Sociedad also won on the road ahead of its encounter with Barcelona, defeating Cádiz 1-0 with a goal and a great performance by Japanese attacking midfielder Takefusa Kubo.

"It's like he's been with us for three years already," Sociedad coach Imanol Alguacil said of the 21-year-old Kubo, who arrived this season on loan from Madrid.

Sociedad, led by veteran David Silva and with an attack spearheaded by Kubo and Alexander Isak, was near the top most of last season, finishing in sixth place.

Madrid opened by coming from behind to win at Almería. The defending champions will stay on the road on Saturday to visit a Celta Vigo team that blew a two-goal lead and conceded an equalizer eight minutes into stoppage time against Espanyol in its home opener.

Madrid coach Carlo Ancelotti may be able to count on the return of right back Dani Carvajal and forward Rodrygo, who missed the first match while nursing injuries.

With striker Álvaro Morata red hot, Atlético hosts Villarreal on Sunday in a match between clubs that opened with big victories — Atlético won 3-0 at Getafe and Villarreal 3-0 at Valladolid. Real Betis was the only other team to open by winning by as many goals.

Morata, back from his two-year loan with Juventus, scored twice against Getafe to practically secure the starting spot in attack over Antoine Griezmann. The France forward scored the other goal on Sunday, with João Félix getting all three assists.

Villarreal coach Unai Emery may count on Argentina midfielder Giovani Lo Celso, who is back on loan from Tottenham.

Sevilla, the fourth-place finisher last season, will try to rebound from its opening loss at Osasuna when it hosts Valladolid on Friday. Betis, fifth last season, travels to face Mallorca on Saturday.

Athletic Bilbao will look for its first win since coach Ernesto Valverde returned when it hosts Valencia on Sunday. Valencia opened with a win against Girona in the debut of coach Gennaro Gattuso.