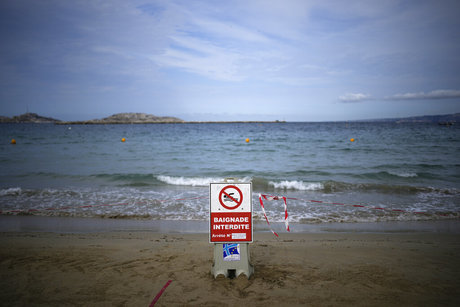 A 13-year-old girl died after a tree fell in a campsite in the coastal town of Sagone, the Corsica prefecture said in a statement. A 72-year-old woman was killed when the roof of a beach restaurant fell on her vehicle in Coggia, south of Sagone.

The third victim was a 46-year-old man killed in a campsite in the town of Calvi. One of the 12 people injured was hospitalized in critical condition, the prefecture added.

The storm produced wind gusts of more than 220 kph (136 mph) in some areas, French national weather agency Meteo France said. About 45,000 households were without power on Corsica, according to French electricity company EDF.

Rescue operations were taking place along the western coast of Corsica to help several grounded and wrecked ships, the French maritime authority for the Mediterranean Sea tweeted.

The president of the Executive Council of Corsica, Gilles Simeoni, described a brief yet "extremely violent and entirely unpredictable" weather event that lasted "dozens of minutes."

After a summer of drought, heat waves and forest fires, violent storms have hit France and neighboring countries in recent days.

In southern France, thunderstorms Wednesday flooded the Old Port of Marseille and the city's main courthouse and forced the closure of nearby beaches. Winds over 100 kph (60 mph) were recorded at the top of the Eiffel Tower during a flash flood Tuesday.

In northern Italy, a violent overnight storm forced the closures of a train line southeast of Genoa after high winds carried changing booths and other items from nearby beaches onto the tracks, damaging the electrical circuitry.

The storm early Thursday struck during Italy's busiest beach vacation week. The mayor of Sestri Levanti, Valentina Ghio, said whirlwinds were expected, and she appealed to visitors to stay away from beaches until the severe weather had passed.

Hail the size of walnuts pummeled areas of the Liguria region with enough force to break the windows of homes and damage orchards and gardens.

While northern Italy has suffered its worst drought in decades this year, heavy rains in recent days that brought scattered hailstorms, whirlwinds and flooding have damaged or destroyed entire crops of fruits and vegetables along with vineyards and olive orchards, according to Italian agricultural lobby Coldiretti.