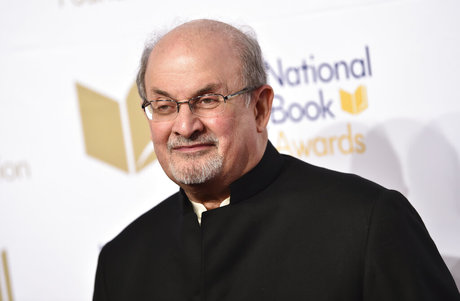 Only ever found in incomplete, clandestine translations in Arabic, "The Satanic Verses" could have gone largely unnoticed in the Arab world, were it not for the Iranian religious edict against its author Salman Rushdie.

When the novel came out in September 1988, sparking mass protests in India, Pakistan and elsewhere, the Arab world was more focused on the first Palestinian intifada, or uprising, against Israel and the Iran-Iraq war.

In Britain and in Rushdie's native India, the book attracted both praise and ire, with tens of thousands railing against it for "insulting" the Prophet Mohammed.

Part of the controversy centered on fictional dream sequences involving the Prophet in the work of magical realism, which the Muslim protesters decried as blasphemous.

British-Egyptian novelist Ahdaf Soueif said, however, that the real shock to many readers of Rushdie's novel was "the language he used to describe the Prophet".

It was "the jokey, familiar language he generally used to describe his characters -– a radical departure from the usual venerating tone people are used to," she said.

A few days after the Iranian fatwa, a group of 40 Arabic intellectuals published an open letter from Damascus titled "In Defense of a Writer's Right to Live".

"We are not here to defend the book, but its author and his right to live and write," they declared, decrying a history of book burning and persecution of writers dating back to the Middle Ages.

Lebanese writer Fawwaz Traboulsi, one of the signatories back then, reiterated the sentiment on Facebook last Sunday -- a day after Rushdie was stabbed during a lecture in upstate New York.

Rushdie, 75, was airlifted to a nearby hospital, where he underwent emergency surgery for life-threatening injuries. His condition remains serious but he has shown signs of improvement.

"What he wrote in the novel can in no way justify a fatwa making his murder a religious duty," argued Traboulsi.

The 1990s saw radical Islamists assassinate thinkers including Algeria's Tahar Djaout and Egypt's Farag Foda, in a region where regimes have often leveraged militant Islamists to keep the political left in check.

Arab literary giants –- such as Palestinians Mahmoud Darwish and Edward Said, Lebanese Amin Maalouf and Algerian Mohammed Arkoun -– could only respond through their writing.

The following year, Mahfouz himself would survive a stabbing attack by two Islamists, who at their trial admitted they had never read his work.

A day after the attack on Rushdie, Egyptian author Ezzedine Fishere tweeted that, to him, it was Mahfouz's "stabbing all over again".

More than three decades on, the controversy has been thrown into relief once more -- now on Twitter and in open letters online, but also through Islamist "electronic fatwas".

The internet has become the main forum for Islamists, who mostly lost power in the region in the years after the 2011 Arab Spring revolutions as they were deposed by secular autocrats.

"It has become a lot harder for political Islamists to get on a platform and endorse the attack on Rushdie," Egyptian writer Sayed Mahmoud told AFP.

But there has also been renewed criticism of Rushdie from other quarters.

A day after the attack, Lebanese journalist Radwan Akil came out in support of the fatwa, saying on national TV that, although he "would not condone an assassination attempt", he thought Rushdie had crossed a line.

"If he had insulted Christ, I would be saying the same," Akil argued, stressing that "there are limits and taboos".

Rushdie is a retard, he asked the Iranians to give him a pass and ordered his publisher to stop printing and translating the book right when the fatwa was issued but when he realized that the ayatollah wouldn’t lift the fatwa on him, he ordered them to resume everything. So much for a sincere apology!

This fool isn’t worth the media attention, he’s a mediocre writer and would have remained anonymous if not for the fatwa.