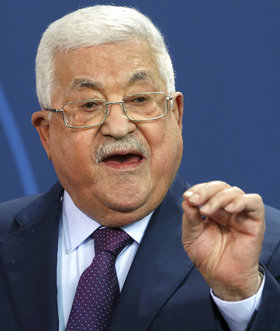 Berlin police said Friday they have launched an investigation into Palestinian president Mahmud Abbas over his comments on the Holocaust during a recent visit to the German capital.

Police have received a complaint accusing Abbas of "relativizing the Holocaust" and are investigating "on suspicion of inciting hatred", a police spokeswoman told AFP.

Any relevant findings will be passed to Berlin prosecutors who will eventually decide whether a crime has been committed.

At a joint press conference with German Chancellor Olaf Scholz on Tuesday, Abbas had accused Israel of committing "50 Holocausts" against Palestinians since 1947.

Scholz did not immediately challenge Abbas on his comments but, following widespread criticism, tweeted on Wednesday that he was "disgusted by the outrageous remarks" made by the Palestinian leader.

In Israel, Abbas' remarks drew a hail of condemnation from Prime Minister Yair Lapid and others.

"Mahmud Abbas accusing Israel of having committed '50 Holocausts' while standing on German soil is not only a moral disgrace, but a monstrous lie," Lapid wrote on Twitter.

According to Germany's Bild daily, the foreign ministry believes Abbas will benefit from diplomatic immunity because he was in Germany on an "official visit".

But Michael Kubiciel, a professor of criminal law quoted by Bild, said Abbas could only enjoy immunity if he had been in Germany "as a representative of another state".

Germany does not recognize Palestine as a country, but maintains diplomatic relations with the Palestinian territories.

The German roaches at work, not only they’re the #1 sponsor of Israel , contrary to the people’s beliefs that it’s the USA but they’re accomplices in the ongoing genocide and ethnic cleansing of the Palestinian autochthonous population of the Levant.

If anything Germany should be tried before the ICC for the crimes it committed and keeps committing. The ICC being corrupt and politicized to its core would never even accept to process such a request.

Finally, it appears that the Germans don’t know the exact definition of Holocaust. Yes Israel is responsible for many holocausts.