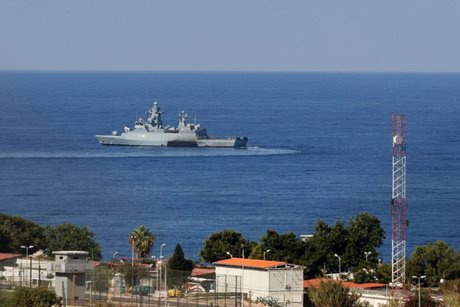 In remarks published Friday, the daily said that Israel wants guarantees that Hezbollah will not attack Israel gas rigs in case the agreement is not reached by mid-September.

The agreement would give Lebanon the Line 23 and all of the Qana field, according to the report.

"Israel has sent clear messages to Hezbollah, saying that it has accepted Lebanon's demands and asking for guarantees that Hezbollah will not attack Karish," the daily quoted informed sources as saying.

In June, Israel moved a production vessel into Karish, parts of which are claimed by Lebanon. The move forced the Lebanese government to call for the resumption of U.S.-mediated negotiations, and Hochstein answered the request and visited Beirut, while Hezbollah threatened Israel against proceeding with extraction.

If there was no Hezbollah as deterrence, then Israel would've drilled wherever and whenever they want, and taken as much of Lebanons natural resources as they saw fitting.
This is the reason we have Resistance in Lebanon, without the Resistance Lebanon would be an Israeli province, just like they kept the South as an outpost until they were kicked out.

If there was no Hizballah, agreement would have been reached a long time ago, not only on the maritime border, but on many other problems between the two countries (mind you if it weren't for Hizballah most of them wouldn't even exist).

Why does israel enjoy killing children so much?

what about syria who does not recognise our border and deprives lebanon of around 3000 km2. What about syria stealing our water from the assi river and the naher el kabir.

If so, Hezbollah must be recognized as a unit of the LAF under government control. Lebanon can't claim, as it has in the past, that it is not responsible for Hezbollah attacks on Israel.

Lebanon's government and Israel are in agreement that Qana is Lebanon's and Karish is Israel's .. That reality is inconsistent with Mystic aping Hidin' Hassan's lie that Israel has taken Lebanon's natural resources. Since Hezbollah's claim of an enemy transgression is false, is there any remorse or shame from the liars?

"Resistance" in all its forms is a lie (and no basis for a country or government of free people).