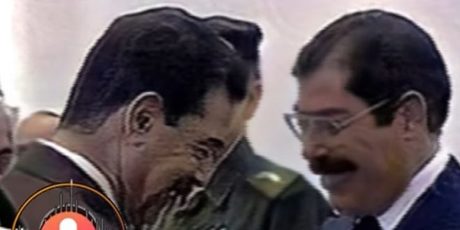 Lebanon’s General Security agency has arrested Abdullah Yasser Sabawi, a grandson of Saddam Hussein’s half-brother Sabawi Ibrahim al-Tikriti, who is accused of involvement in the 2014 Camp Speicher massacre in Iraq.

“He is accused of carrying out criminal operations that resulted in the death of thousands of innocents, based on an Interpol warrant that has been enforced by the relevant Lebanese security agencies,” General Security chief Maj. Gen. Abbas Ibrahim told Iraq’s IMN TV.

“We operate as per the international law, the judiciary and the warrants of exchanging and extraditing fugitives among nations, especially a brotherly country like Iraq,” Ibrahim added.

“We in turn reject any impunity and we support the implementation of the law without any interferences or pressures, and this is our duty towards our people in Iraq,” the major general added.

According to media reports, Sabawi, 27, had sought refuge in Lebanon in 2018 along with his family, after having lived in Yemen in the wake of the fall of Saddam Hussein’s regime.

“Sabawi’s apartment in the Lebanese city of Jbeil was raided on June 13 and he was arrested on charges of collaborating with the Islamic State group, based on a request from Iraqi authorities,” the reports said.

The Camp Speicher massacre occurred on June 12, 2014, when the Islamic State group killed between 1,095 to 1,700 Iraqi cadets in an attack on Camp Speicher in Tikrit, Iraq.

At the time of the massacre, there were between 5,000 and 10,000 unarmed cadets in the camp, and IS fighters selected the Shiites and non-Muslims for execution. It is the second deadliest act of terrorism in history, only surpassed by the September 11 attacks.

If "we operate as per the international law", what about capturing the murderers the STL kept talking about? No arrests and criminals taken into custody by way of implementation of that law? The trial has already happened .. they are guilty ... capture them and deliver Justice (or tell the enemy where they are so they can do us all the favor of ending them).

Hypocrites !! that is what the Lebanese Government are
It is very clear , Abbas Ibrahim went to Iraq recently, asked for help in fuel and got it, but the Iraqis demanded Sabawi in return for this favour , and of course they got him. Let's not lie to ourselves and let's be truthful. What about Ghosn , he is also wanted , how come he is protected in Lebanon, and of course STL., I can list many more .........what a load of corrupt officials we have in this small and lost country