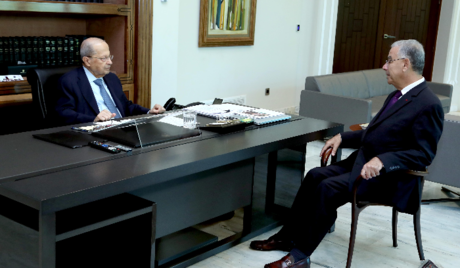 President Michel Aoun on Thursday dismissed media reports claiming that he intends to stay in the presidential palace until the election of a new president even if his own term expires.

“The president stressed the need to form a new government as soon as possible,” Maronite League chief Khalil Karam said after meeting Aoun in Baabda.

“His Excellency considers that the caretaker cabinet will not be able to practice its responsibilities in a full manner should there be failure to elect a new president for any reason,” Karam added.

“Contrary to what is being rumored, President Aoun will commit to the constitution’s stipulations regarding the date of the end of his term, but at the same time he does not believe that (a government) that lacks the full standards as well as parliament’s confidence can fill vacuum at the level of the head of the state,” Karam went on to say.

He added: “Accordingly, Mr. President believes that the formation of a new government should remain among the priorities, and he will continue to work for achieving that while relying on the constitution and seeking to preserve national partnership and balance among authorities.”

Whoever this guy is, look at this nonchalance , that’s how a loser sits on a chair.