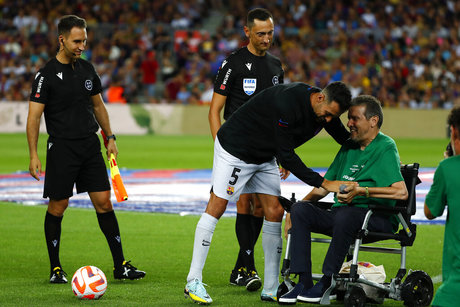 Barcelona and Manchester City drew 3-3 in a friendly to raise money and awareness for the fight against ALS on Wednesday.

More than 91,000 fans were at the Camp Nou for the match, with the proceeds going to help raise funds for research against ALS, also known as Lou Gehrig's disease, an incurable neurodegenerative disorder.

The honorary kickoff was taken by Juan Carlos Unzué, the former Barcelona goalkeeper and goalkeeping coach who has the disease and helped promote the friendly.

"We want to continue living and enjoying life," he said before the match.

Man City defender Luke Mbete had to be substituted late in the game after a clash of heads with Barcelona defender Andreas Christensen. Mbete had to be immobilized and carried out on a stretcher.