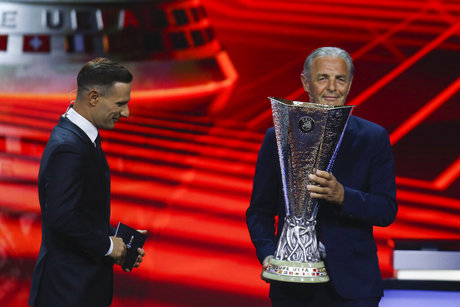 Manchester United will start another season in the Europa League in a group with Real Sociedad, Sheriff and Omonoia after the draw was made Friday.

Man United, which won the Europa League in 2017 and was the beaten finalist two years ago, entered the second-tier competition by placing just sixth in the Premier League last season.

It was unclear Friday if Cristiano Ronaldo will still be at the club for the first round of games on Sept. 8 with more speculation linking him to a move from Old Trafford, this time with Napoli which is in the Champions League. On Thursday, Napoli was drawn in the same group as Liverpool.

The draw brings United face-to-face again with long-time Manchester City favorite David Silva, who returned to Spain to play for Sociedad, and two of the longest journeys to away games in the draw – to Moldova and Cyprus.

Dynamo Kyiv of Ukraine – which will play its home games in neighboring Poland – will face Rennes, Fenerbahçe and AEK Larnaca.

The Europa League starts early this season on Sept. 8 and ends more than one month sooner than usual on Nov. 3. That is because of the World Cup in Qatar, which starts Nov. 20.

The six rounds of group-stage games span just eight full weeks before a midwinter break until the knockout playoffs round starts Feb. 16.

Group winners advance direct to the round of 16 in March and runners-up go to the knockout playoffs with the eight teams switching across from the Champions League after finishing third in a group there.

The Europa League final is on May 31 at the 65,000-capacity Puskás Aréna in Budapest, Hungary.

Third-place teams in Europa League groups in November move to the knockout playoffs in the third-tier Europa Conference League.

A team starting in the Europa group stage and eventually winning the title can earn about 40 million euros ($40 million) in UEFA prize money. That's about one-third of expected earnings in Champions League prize money.