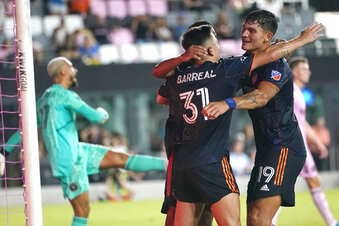 Brandon Vazquez and FC Cincinnati agreed Thursday to a contract extension through the 2025 season, a deal that includes an option for 2026.

The 23-year-old forward has a career-best 15 league goals this season, tied for third in Major League Soccer with Dallas' Jesús Ferreira and one behind Austin's Sebastián Driussi and Nashville's Hany Mukhtar.

Vazquez is a possible pick for the U.S. roster for exhibitions against Japan and Saudi Arabia, the team's last two prep games ahead of the World Cup.

The native of Chula Vista, California, was acquired in November 2019 from Nashville, which selected Vazquez from Atlanta in an expansion draft.