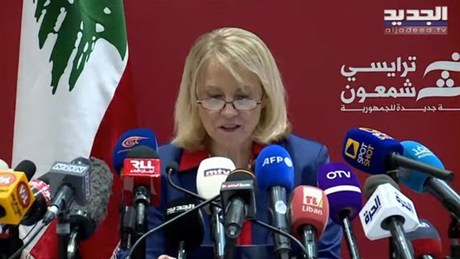 Tracy Chamoun, an ex-ambassador and granddaughter of late president Camille Chamoun, announced Monday she will run for the presidency of crisis-hit Lebanon, in a rare such bid by a woman in the small country.

Chamoun, 61, has not yet received a formal endorsement from any of Lebanon's ruling parties in parliament, whose 128 legislators are tasked with voting for the country's president.

"I announce to the Lebanese people, and their lawmakers... my candidacy in Lebanon's upcoming presidential elections," Chamoun told a news conference marking the launch of her campaign for the post, which is reserved for Lebanon's Maronite Christians.

"I have a new vision for the republic, one that can offer solutions to the economic, political and social problems," plaguing the state, she added, styling herself as a bulwark against the incumbent ruling class.

Chamoun also criticized Hezbollah's influential role in politics and security, its arms, and its impact on Lebanese relations with Saudi Arabia and other Gulf states.

"Lebanon cannot continue without its independence and sovereignty and without a clear defense strategy," Chamoun said. "Lebanon cannot be ruled by one group, and its decisions related to peace and war can only be done through its institutions."

Chamoun comes from a prominent Christian political family. Her grandfather, the late president, founded the right-wing National Liberal Party. She also is the daughter of Dany Chamoun, who led the party's "Tigers" militia in the Lebanese civil war from 1975 until 1990.

Five gunmen assassinated her father in 1990 alongside his second wife Ingrid, and their sons, 5 and 7. The couple's youngest daughter, 11 months old, survived. Chamoun, then 30, was living in London.

The murder was blamed on rival Christian leader Samir Geagea. Geagea, who is also expected run for president, was convicted in 1994 for Chamoun's killing -- a charge he denies as politically motivated.

Chamoun was Lebanon's ambassador to Jordan from 2017 until her resignation in August 2020, days after the Beirut Port explosion that killed over 200 people and wounded over 6,000 others.

Chamoun would be the second woman to officially announce her candidacy in the Lebanese presidential elections, after lawyer and civil society activist Nadine Moussa in 2014.

Chamoun is the founder of the Liberal Democrats Party of Lebanon -- one of the first in the country to be established by a woman but which has little political sway.

Elections are expected to be held before Michel Aoun's six-year presidential mandate expires in October, but many expect delays in light of deep political divisions.

It took Lebanon's bitterly divided political class more than two years to elect Aoun in 2016 -- a delay the country can ill afford this time around in light of an unprecedented economic crisis.

Despite mounting woes, parliament has rarely met since it was elected in May.

I am waiting for the insults she will be receiving on her Twitter account. There will be some sad misogynist men commenting.

All the best Tracy.

Divide Lebanon into Hizbollahstan and the Free Lebanon so each nation can live to its full potential since nothing left in common. Enough having Hizb and duo sucking the blood of productive Lebanese. They are primary culprit in EDL deficit (half of total deficit), isolating Lebanon, exiling western firms with their good paying western firms, bankrupting the country, destroying our institutions from education, banking and health care, and imposing by force and intimidation a Basij backward culture foreign to Lebanese traditions and values. Shia voted overwhelming for the duo so it is time to divide Lebanon as the duo represent freedom and democracy enemy No 1. This must be done before this malignant cancer overtake Lebanon, kills all hopes, destroy its children future, and make it a permanent basket case.