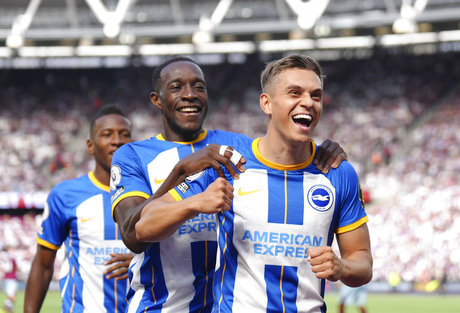 A look at what's happening in European soccer on Tuesday:

Brighton is the big surprise after the first four rounds of the Premier League, with Graham Potter's team taking its unbeaten record to Fulham at the start of a midweek round of games. Brighton has three wins — against Manchester United, West Ham and in-form Leeds — and a draw so far and has only conceded one goal. The south-coast club is defying expectations following the sale of two key players during the offseason — Marc Cucurella to Chelsea and Yves Bissouma to Tottenham. Chelsea visits Southampton and welcomes back defender Kalidou Koulibaly from suspension, even if midfielder Conor Gallagher starts a ban of his own after his red card in the 2-1 win over Leicester on Saturday. In other games, Leeds hosts Everton and Brentford visits Crystal Palace.

AC Milan and Inter Milan — last season's top two finishers — warm up for Saturday's derby by facing Sassuolo and Cremonese, respectively. Milan's 21-year-old playmaker Charles De Ketelaere is the talk of the town after he lit up the San Siro with his crosses and an assist for the first goal in a 2-0 win over Bologna on Saturday in his first start since joining from Club Brugge. Inter, meanwhile, is looking to bounce back from a discouraging 3-1 loss at Lazio. But the Nerazzurri are without striker Romelu Lukaku, who picked up a muscle issue in training. Also, Jose Mourinho's unbeaten Roma hosts Silvio Berlusconi's Monza, which has lost its first three matches.

Defending champion Leipzig hosts Teutonia Ottensen for their postponed German Cup first-round game. Hamburg-based Ottensen, an amateur side which plays at fourth-tier level, was originally supposed to host the match but was forced to look for an alternative venue as its own stadium uses artificial grass. Hosting it locally also proved difficult as St. Pauli, for one, declined a request to make its stadium available for Leipzig's visit. Leipzig is unpopular among rival clubs and supporters due to its heavy backing from an energy drinks company which has financed its fast rise for marketing purposes. Ottensen eventually settled on hosting the match in Dessau but vandals destroyed the grass at the Paul-Greifzu-Stadion with a suspected chemical substance last week, making the surface unplayable. The German soccer federation said it had no option but to host the game in Leipzig.