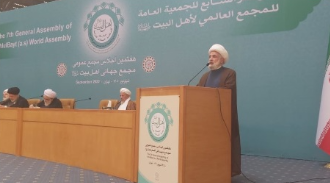 Hezbollah deputy chief Sheikh Naim Qassem has announced from Tehran that Hezbollah “has contributed to changing the equations of the region.”

“The course shifted from consolidating the usurper entity (Israel) to the course of liberating Palestine, and from deep-rooting subordination to the West to people’s independence, and from surrender to resistance and dignity,” Qassem said at the Seventh Session of the General Assembly of AhlulBayt in the Iranian capital.

Qassem also stressed “the need for unity and cooperation of Muslims” and “the role of the leadership of the Wali al-Faqih (Iran’s supreme guide Ali Khamenei) as a compass for strengthening common denominators and drawing the unified course.”

Stay in Iran, you and your buddies are personae non gratae in Lebanon .

Cooperation of Muslims - Muslims are always at each other throats. Just look around the world and Middle East inarticulate. Shiite v Shiite, Sunni v Sunni, Sunni v Shiite. in all their forms and their splinter groups and sects.

What an absolute demagogue this Qasem is. What was he a chemistry teacher if am not mistaken. Walter White of Breaking Bad would be proud.

So shameful that Lebanese have to go to Iran to grovel at the feet of these rats and vermin who cause trouble all over the world. I think all the pro Iranian Lebanese should emigrate to Iran and get out of Lebanon- they take it back to the 15th Century.

Hizbollah or more accurately Iran's foreign Legion, is how Suleimani's Kiss Of Death is used to militarize all Shia community to serve the criminal Iranian guards nuclear and regional hegemony ambitions while leaving utter desolation behind for both these indoctrinated Shia communities as well as their entire countries or the desolate place that is left. They have transformed Shia into most hated group in the world, suspects at all embassies, antidote for freedom and democracy, with reputation mixed with uncivilized, indoctrinated and brutal Basij... the bullies of the region. Hopefully one day Lebanese Shia, historically the most democratic and free Shia in the world, wake up to the crime committed in their name by Hizbollah and Suleimani's kiss of death.

God bless Hezbollah deputy chief Sheikh Naim Qassem for confirming what has been known for a while regarding our Shia resistance's love for geometry, algebra and equations. The formula that our Shia resistance has put in place helped solve the region's equations. Schools throughout the region and the world at large are teaching Hezbollah's formula which addresses independence and sovereignty.

Being under the leadership of the Wali al-Faqih, nations across the globe have a new meaning for sacrifice, pleasure, and achievement.

This uneducated Iranian is right. The hezb did change the equation. They made Lebanon and the Lebanese the poorest country and people on the planet. Kudos for a job well done