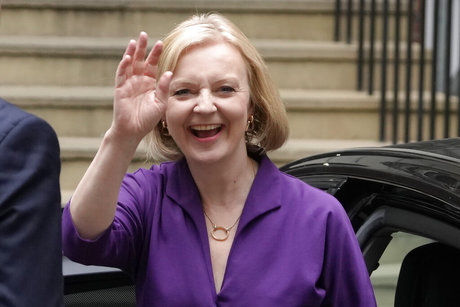 There is little chance of Britain resetting relations with France under incoming prime minister Liz Truss, experts say, with the neighbors' geographical proximity and sometimes diverging interests making for a testy post-Brexit relationship.

Truss played on tense cross-Channel ties during the Conservative party leadership election, declaring, "The jury's out" when asked whether French President Emmanuel Macron was a "friend or foe".

It was the latest in a string of barbs at Paris from UK leaders that have at times exasperated the French.

"The United Kingdom is a friendly, strong and allied nation, regardless of its leaders, and sometimes in spite of its leaders," Macron later responded.

"(Truss's) pitch to the party faithful is that she's going to be very tough on Europe and very tough particularly on Macron, because that plays well with the Conservative base," former British ambassador to Paris Peter Ricketts told AFP.

Led since 2017 by the passionately pro-EU Macron, Britain's historic rival France has become a preferred scapegoat for post-Brexit tensions.

"Because of the nearness and because of the huge movement of people and freight... the Brexit irritations and annoyances tend to happen mostly between Britain and France," Ricketts said.

Around 55 percent of goods trucks -- around a million vehicles -- leaving Britain in 2020 used the ferry or rail crossings between Dover and Calais, according to UK government figures.

Meanwhile the French government reported 12 million British visitors in 2019 -- the last year before the coronavirus crisis -- and Britain 3.6 million French.

London and Paris also rowed in 2021 over shortages of AstraZeneca's Covid-19 vaccine.

"We can be sure of a continued high level of stress and friction" at the border, Ricketts said, highlighting a new EU advance travel registration system known as ETIAS beginning next year.

In fact, "we could be in a full-fledged trade war with the European Union in eight months" if Truss abandons parts of the Brexit deal relating to checks at the Irish border, said Anand Menon, professor of European politics at King's College London.

But Menon argued escalation was unlikely given the danger it might worsen the cost-of-living crisis.

Less crucial to the economy have been noisy disputes over issues like fishing licenses for French boats around the Channel islands -- now mostly resolved -- and migrants trying to cross to Britain in dinghies.

British and French interests further afield can be closely aligned -- for instance in trade and security.

The two governments "don't always come to the same solutions ... but they do share many of the same instincts", said Georgina Wright, Europe program director at French think-tank Institut Montaigne.

Since 2010, they have been linked by treaties providing for a shared expeditionary force, missile development and even nuclear testing.

French Foreign Minister Catherine Colonna, herself a former ambassador to London, nevertheless told RTL radio on Monday that "because of Britain's attitude to the European question, (relations) aren't up to the role our two countries ought to play" on the global stage.

For now, Britain's leaders are pursuing the go-it-alone slogan of "Global Britain".

"There's absolutely no political payback for working closely with the EU" on foreign policy, Menon said.

Britain has sided with other European powers including France in trying to bring the United States and Iran back to the deal to limit Tehran's nuclear program in exchange for sanctions relief.

But while both have responded to Russia's invasion of Ukraine with strong sanctions, some in France complain of British grandstanding over arms deliveries, while London mistrusts Paris' insistence on keeping talks going with Russian President Vladimir Putin.

And there was a fierce clash with Paris last year over the Indo-Pacific, when Britain struck an alliance dubbed AUKUS with the U.S. and Australia that saw Sydney cancel a lucrative order for French submarines.

"The AUKUS affair is 'Global Britain' applied to Asia... It's logical," said Jean-Pierre Maulny of the Paris-based Institute for International and Strategic Relations (IRIS).

"But that logic runs against French interests and those of the Europeans in general," he added.

"I don't think that Liz Truss (becoming prime minister) will change a huge amount," Maulny predicted, adding, "In the short term we have no hope (of improving ties)."