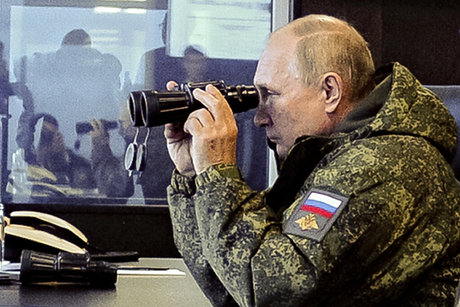 Russian President Vladimir Putin on Tuesday attended sweeping war games in his country's far east involving troops from China and other nations, in a show of military muscle amid the tensions with the West over Moscow's action in Ukraine.

The weeklong exercise that began Thursday is intended to showcase growing defense ties between Russia and China and also demonstrate that Moscow has enough troops and equipment for the massive drills even while its forces are engaged in fighting in Ukraine.

The Russian Defense Ministry said that the Vostok 2022 (East 2022) exercise that runs until Wednesday at seven firing ranges in Russia's Far East and the Sea of Japan involves more than 50,000 troops and over 5,000 weapons units, including 140 aircraft and 60 warships. It engages troops from several ex-Soviet nations, China, India, Laos, Mongolia, Nicaragua and Syria.

Beijing sent more than 2,000 troops along with more than 300 military vehicles, 21 combat aircraft and three warships to take part in the drills, according to Chinese news reports. As part of the maneuvers, the Russian and Chinese navies in the Sea of Japan practiced joint action to protect sea communications and support for ground forces in coastal areas.

Neil Melvin, the head of international security studies at the Royal United Services Institute in London, observed that the drills are intended "to indicate to the West, to its partners in Asia that this is an emerging security and military relationship that needs to be taken account of."

The drills continue a series of joint war games by Russia and China in recent years, including naval drills and patrols by long-range bombers over the Sea of Japan and the East China Sea. Last year, Russian troops for the first time deployed to Chinese territory for joint maneuvers.

The exercise marked the first time that China has sent forces from three branches of its military to take part in a single Russian drill, a sign of increasing close ties between Moscow and Beijing, which have grown stronger since Putin sent his troops into Ukraine on Feb. 24. China has pointedly refused to criticize Russia's actions, blaming the U.S. and NATO for provoking Moscow, and has blasted the punishing Western sanctions against Russia.

The Kremlin, in turn, has strongly backed Beijing amid the latest tensions with the U.S. that followed a recent visit to Taiwan by U.S. House Speaker Nancy Pelosi.

Putin and Chinese President Xi Jinping have developed strong personal ties to bolster a "strategic partnership" between the former Communist rivals as they both are locked in rivalry with the U.S. Even though Moscow and Beijing in the past ruled out a military alliance, Putin has said that such a prospect can't be excluded.

Analyst Melvin said that, while Beijing wants to showcase its growing defense ties with Russia, China is not in a situation where it can support Russia economically without damaging its own core interests because of its focus on the North American and European markets. Mindful of sweeping Western sanctions against Russia, "Chinese business has had to look very carefully at its economic relationship with Russia, and in many cases, the Chinese businesses have concluded that it'd be too risky to carry on doing business," he said.

Melvin said Moscow's campaign in Ukraine and the Western sanctions has made Russia increasingly reliant on China.

"China is clearly going to be setting the agenda more and more," Melvin said. "It may be actually demanding more of Russia."

Yeah... the world is impressed of your crappy army.
You and the chinks are terrifying...