Aoun threatens not to leave Baabda if others 'corner' him 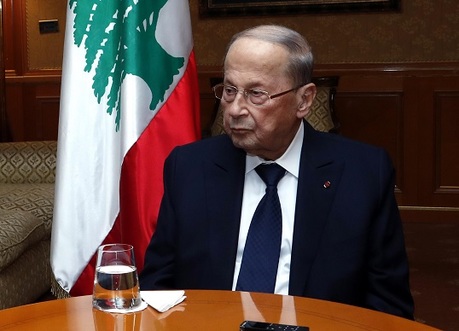 President Michel Aoun has hinted that he might eventually choose not to leave the Baabda Palace upon the end of his presidential term on October 31.

“This (caretaker) government is not eligible to assume my powers after the end of my term, and I consider that it does not enjoy the national legitimacy to replace the president of the republic,” Aoun said in an interview with al-Joumhouria newspaper.

“That’s why if no president is elected and if no government is formed before October 31, and if they insist to corner me, there will be a question mark over my next step and over the decision that I might take,” Aoun added.

The president also warned that his rivals are “tampering with the delicate balances that characterize this country.”

“As if what they did during my tenure was not enough. They now want to follow me to my home and continue the war against me, but I will not allow them to impose a fait accompli on me, whether I am in Baabda or in Rabieh,” Aoun went on to say.

He also noted that he is “ready to cooperate to form a government immediately.”

“The chance to form a new government is still available, and I call on PM-designate (Najib) Mikati to seize it and deal with it in a serious manner,” the president said.

And stressing that a new president should be elected within the constitutional timeframe, Aoun lamented that "unfortunately, it seems that there is a foreign will pressing some parties to seek postponement, because the ‘mold’ of making the president is not ready yet.”

As for his relation with Hezbollah, Aoun said his presidential term and Free Patriotic Movement chief Jebran Bassil “paid the price” for this relation.

“This relation was established for the sake of Lebanon… and we do not regret it, because what we were convinced with what we did,” the president added.

He, however, lamented that his Hezbollah “did not support” him on some key issues, “especially the issues of electricity and combating corruption.”

“I do not sympathize with the reasons behind these stances although I know what they are,” Aoun added.

Ironic isn't it. The last time he was in Baabda and they cornered him, he ran out of there so fast he forgot he had a wife and three young daughters.

The Amn Eddawla and LAF oath binds one to country and not to religion, group/sect/tribe, the Presidency or other political office, or to a man.

International media will gladly report about a Christian forcibly removing a Christian from his temporary residence.