Baptism of fire as UK PM wrestles with queen's death 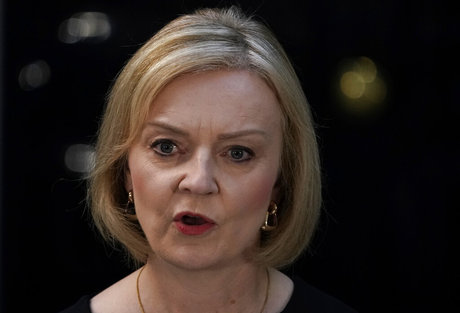 For the first time in its long history, Britain acquired a new prime minister and monarch in the same week with the death of Queen Elizabeth II on Thursday.

Boris Johnson's Conservative successor Truss was only appointed premier by the queen on Tuesday, in an event that yielded the monarch's last official photograph.

"I have personally greatly valued her wise advice," both before and since becoming premier, Truss told a hushed House of Commons on Friday.

"She generously shared with me her deep experience of government, even in those last days."

"Everyone who met her will remember the moment," the new premier said. "They will speak of it for the rest of their lives."

Just hours before the queen's death, Truss had been in parliament unveiling a huge package of emergency relief to cap rocketing energy prices.

The debate was interrupted after she and opposition leaders were discreetly handed notes, informing them that the queen's health had taken a serious turn for the worse.

About four hours later, Truss was told of her death by Buckingham Palace, according to Downing Street -- two hours before the nation and world were informed.

Truss was the queen's 15th prime minister in a 70-year reign that opened with wartime leader Winston Churchill in Downing Street.

The queen was just 25 when she succeeded her father in 1952. By her own admission, Elizabeth relied on Churchill to help her fulfil the constitutional duties attendant on the monarch.

At the time -- in the aftermath of World War II and as the Cold War emerged -- Churchill told parliament: "She comes to the throne at a time when a tormented mankind stands uneasily poised between world catastrophe and a golden age."

By the end of the reign, prime ministers had come to rely in turn on the queen's decades of experience and sotto voce guidance during their weekly, and very private, audiences.

That is an opportunity denied to Truss as she starts out under a new king, Charles III, who in his decades of serving as heir has often intervened on political questions, usually controversially.

"She was a very acute judge of people and was able often to give those little, if you like, pen portraits of people that she knew, that she'd met," May told BBC radio on Friday.

"And sometimes it was a case of not just the individual but actually a sort of history of that individual, of her experiences of particular countries, particular issues," she said.

If, among her many premiers, the queen felt closest to Churchill, declassified files show she was incensed at Margaret Thatcher's refusal to impose sanctions on apartheid South Africa.

And her constitutional relationship with Johnson was fraught. He was felled by a revolt among Tory party MPs after a series of scandals, which at one point embroiled the monarch herself.

In September 2019, the Supreme Court ruled that Johnson had illegally suspended parliament in a bid to break legal deadlock over Brexit.

In effect, he had lied to the queen, whose blessing was required for the ill-starred prorogation.

But on another occasion, following the shocking death of Princess Diana in 1997, the monarchy itself owed credit to a quick-thinking prime minister.

Tony Blair stepped into the breach when the queen was coming under pressure from a furious public to give more fulsome recognition to Diana's death.

Calling Diana the "people's princess", Blair helped channel the national mood, and advised the palace to shed the constitutional pieties that had seen the queen fall out of line with the public's sense of shock.

But Blair and his Labor successor Gordon Brown also paid tribute Thursday to the queen's expertise and sense of duty, as did the Conservative John Major, who followed Thatcher in Downing Street.

"And on foreign affairs, she would always say if there was a difficulty of a foreign leader, 'Well I met him many years ago' or 'I knew his father'.

"There was always a wise word to be had. And those meetings with the queen were always the better part of a prime minister's week."