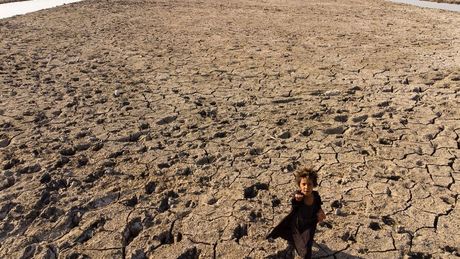 The Middle East is heating at nearly twice the global average, threatening potentially devastating impacts on its people and economies, a new climate study shows.

The study found an average increase of 0.45 degrees Celsius per decade across the Middle East and eastern Mediterranean region, based on data for 1981-2019, during which the global average rise was 0.27 degrees per decade.

Without immediate changes, the region is projected to heat up by five degrees Celsius by the end of the century, possibly exceeding "critical thresholds for human adaptability" in some countries, the report states.

People "will face major health challenges and risks of livelihood, especially underprivileged communities, the elderly, children and pregnant women", wrote Jos Lelieveld of the Max Planck Institute for Chemistry and the Cyprus Institute, which both provided support for the research.

The study covers the region stretching from Greece and Egypt in the west through to Lebanon, Syria and Iraq, and the Gulf states of Bahrain, Kuwait and the United Arab Emirates as well as Iran in the east.

The Middle East not only stands to suffer seriously from climate change but has also become a major contributor to it, said the report first published in June in the journal Reviews of Geophysics and updated this week.

The study shows that the oil-rich Middle East is on course to becoming one of the world's leading sources of greenhouse gas emissions, overtaking the European Union within several years.

Lelieveld warned that, "since many of the regional outcomes of climate change are transboundary, stronger collaboration among the countries is indispensable to cope with the expected adverse impacts".

According to the report, "virtually all" areas of life will be "critically affected" by hotter, dryer climate conditions, potentially contributing to an increase in mortality rates and exacerbating "inequalities between the more affluent and impoverished populations" of the region.

Representatives from nearly 200 countries are due to meet in November in the Egyptian Red Sea resort town of Sharm el-Sheikh to follow up on the 2015 Paris Agreement, which saw nations promise to limit global heating to "well below" two degrees (3.6 degrees Fahrenheit) and to work towards a safer 1.5 degree cap through sweeping emissions cuts.

The planet has warmed on average by nearly 1.2 degrees since per-industrial times. In May, the U.N.'s World Meteorological Organization said there was an even chance that the 1.5 degree target would be breached within the next five years.