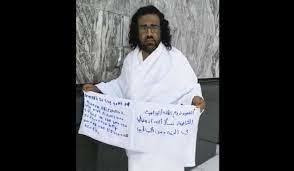 Saudi police arrested a Yemeni man this week after he advertised on social media his pilgrimage to Mecca, where he paid tribute to the memory of Queen Elizabeth II.

The pilgrim, who was not identified by name, had posted footage earlier this week that showed him holding a banner honoring the late queen from inside the courtyard of Mecca's Grand Mosque.

The clip quickly spread online, sparking outrage among devout Muslims and leading to the man's arrest on Monday for "violating the regulations and instructions" of the holy site. Security forces referred him to the public prosecutor to face charges.

The Grand Mosque, among the holiest sites in Islam, is off-limits to non-Muslims. Saudi Arabia also bans signs and political slogans from the sacred courtyard for fear of offending Islamic sensibilities. Queen Elizabeth, who died last week, was head of the Church of England.

"Umrah for the soul of Queen Elizabeth II, may Allah grant her peace in heaven and accept her among the righteous," the banner read in English and Arabic.

The mosque's white-and-gray marble complex is visible behind the Yemeni man. Umrah is the lesser pilgrimage to Mecca, which can be performed at any time of the year.