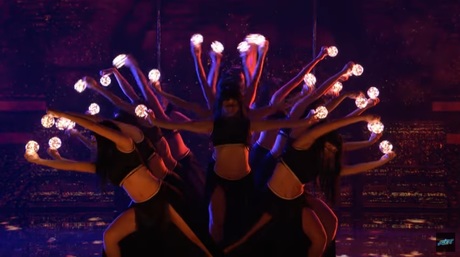 The news of a Lebanese dance group winning the TV competition show America's Got Talent brought a rare moment of joy on Thursday to many in the crisis-hit country.

Mayyas, an all-female dance troupe, dazzled the show's judges and audience on the competition's 17th season before winning $1 million and a headlining show at the Luxor Hotel and Casino in Las Vegas. The group paid tribute to Lebanon during their performances and on social media in the buildup to the finale.

The victory is a major boost for any aspiring artist. But inside Lebanon, where the political leadership is scrambling to overcome years of economic and political turmoil, there was a high-profile rush to congratulate the dance troupe.

Caretaker Prime Minister and PM-designate Najib Mikati and a handful of lawmakers congratulated Mayyas on social media, while President Michel Aoun's office in a statement said the Lebanese head of state will award the dancers Order of Merit medallions upon their return home.

In their hypnotic winning performance in the finale, Mayyas dressed in gold-colored outfits, as they fluttered in sync on stage in a performance that brought together traditional belly-dancing and inspirations from India, the United States and the United Kingdom, where their choreographer attended years of dance workshops.

Holding white feathers, they formed a flowing snow-covered cedar tree, Lebanon's national symbol, before they swayed together holding glowing balls like a moving constellation of stars.

Lebanese, who have been in the grip of the ongoing crises for years, found a rare moment of pride and joy in their country.

"I am among Lebanese citizens who over the past three years went through severe financial, psychological, and social crises," Marie Ziyade, a fan of Mayyas, told The Associated Press. "I have always had hope in the people of my country, but Mayyas brought me joy."

Lebanon's crippling economic crisis has pushed three-quarters of its population into poverty, and resulted in a massive brain drain of young professionals leaving the country for better job opportunities abroad.

Nour Massalkhi is among a surging number of the country's youth who left Lebanon for better jobs and lives. Since leaving in 2019 when the economy crumbled, she says she's felt a sense of "anger and despair" watching her native country's rapid decline from her new home in the United Arab Emirates.

But she says Mayyas' journey to the top on America's Got Talent is a "small glimmer of hope" that Lebanon needs.

"Their win was only one example of the hundred other artists, innovators, and entrepreneurs that continue to persevere abroad," Massalkhi told the AP. "Everything from the music to the choreography and down to their outfits are curated with extreme precision and honors our Lebanese roots."

The dance group's victory was never going to stop Lebanon's economy from spiraling or help break months of political deadlock and tensions that have followed decades of rampant corruption, nefarious financial mismanagement and sect-based power-sharing. But it may have brought a brief moment of hope for the troubled country.

"Mayyas is a group based on merit, that brings together women who have a passion for dance and are talented at it, and coordinate together to put out creative and stunning work," Ziyade said. "I wish our government would appoint ministers and officials the same way . we could have fixed our devastated country."

A Twitter user called Wael summed up the mood about the group that beat all the odds: "They come from a country ravaged by crisis and, despite the difficulties, they managed to be the best. Lebanese all around the world are proud of you."

"You gave us a glimpse of hope and showed the world what Lebanese women are capable of," tweeted another fan, DivaMaj, saluting the group that in 2019 won the Arabs Got Talent contest.

Even the military joined in, declaring on Twitter, somewhat more stiffly, that "the Army Command congratulates the Mayyas group, its trainers and members, on winning America's Got Talent."

There is always hope. Thanks Mayyas for reminding us who we are. We will never give up. Very proud of you!

Jesus would not approve of almost naked women dancing around like shameless women. A nation that thinks it can pretend to be religious while taking sins as culture is deluding itself. At a time when lebanese should be repenting, we see people (mostly maronites to be fair) cheering for this dance group that are acting like lose women. But sure, go ahead and pretend like you love the virgin Mary so much when you go against her values.

Jesus would be proud of every member of Mayyas. Music is one of the joys our happy God gave us (Rev 14:2, Col 3:16, Luke 15:25, Eph 5:19). Jesus gave his life to carry our sins and liberate us from man-made rules. He publicly disobeyed Sabbath and other religious rules. Jesus summarized faith in only 2 rules Love God with your whole heart and love your neighbor as yourself (Mat 22:37-39). Enlightening principles not oppressive laws. Jesus would be proud of a nun or faithful women wearing a hijab out of conviction but surely sadden by any woman forced to wear a hijab or obey a long list of manmade religious rules. Jesus as every person is horrified by Masha Amini being beaten and killed this week by Iran’s morality police for not wearing the proper hijab. This is pure barbarism, nothing to do with religion!

Jesus said, judge not lest ye be judged.