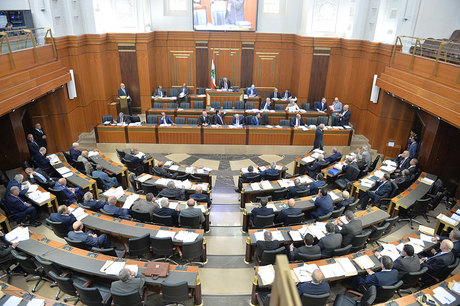 Parliament on Thursday began discussing the draft 2022 state budget, a day after lack of quorum forced the postponement of a scheduled first session.

Outside the legislature, sit-ins by retired servicemen, bank depositors and several associations and unions got underway in protest at the proposed state budget.

Speaking at the session, the head of the finance parliamentary committee, MP Ibrahim Kanaan, said the proposed budget lacks a “an economic and social vision.”

“The scenarios prepared by the Finance Ministry for exchange rates ranging between LBP 12,000, 14,000 and 16,000 will not secure the needed revenues, which the strips the budget of balance, because the revenues are not sufficient for covering salaries, social aid and public debt,” Kanaan added.

Deputy Speaker Elias Bou Saab for his part decried “the procrastination in dealing with the social-economic-financial-security-health-educational crisis,” lamenting that “this state budget is based on borrowing.”

MP Mohammed Raad meanwhile noted that “the draft budget reflects the financial situation in which the country is floundering.”

“The government and its premier should not brag about the draft budget, but we should not hold exclusively hold them responsible for the current situation in the country,” Raad added.