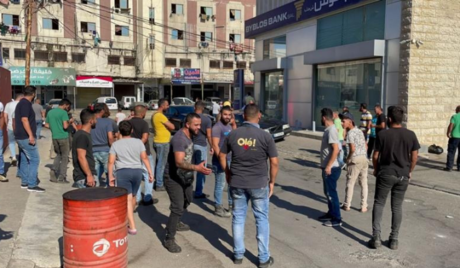 At least five banks were stormed by depositors on Friday, prompting the Association of Banks in Lebanon (ABL) to declare a three-day strike and caretaker Interior Minister Bassam al-Mawlawi to call for an emergency meeting of the Central Internal Security Council.

The incidents started in the morning, when a depositor carrying a gun and a jerrican of fuel withdrew his frozen savings at gunpoint from Byblos Bank in Ghazieh.

The depositor, reported to be in his 50s, stormed the premises with his adult son.

He threatened bank employees with a gun, which a TV channel said may have been a toy, and demanded his savings.

"He emptied a jerrican of fuel on the floor," a bank security guard told an AFP reporter.

The man walked away with around $19,000 and turned himself in to the police moments later as a crowd formed in front of the bank to support him.

Later in the day, a depositor stormed BLOM Bank's Tariq al-Jedideh branch. The man was identified as Abed Soubra, an indebted businessman who has around $300,000 in his account and the accounts of his family.

Witnesses said the man entered the bank carrying a gun and employees were about to give him money before refraining from doing so with the arrival of security forces, who convinced the man to hand over the gun. The man remains locked inside the bank together with police officers.

Another depositor armed with a hunting rifle stormed a branch of the Lebanon and Gulf Bank in Beirut's Ramlet el-Baida neighborhood, taking hostages and demanding he be given his $50,000 deposit.

The man was identified as Jawad Sleem, a former contractor and a father of seven, who has been jobless for months.

The depositor Mohammed Ismail al-Moussawi meanwhile said that he managed to recover $20,000 from the BLF bank in Kafaat in Beirut’s southern suburbs.

He added that he was carrying a toy gun that he left outside the bank and that he was heading to turn himself in to security forces after having seized his deposit by force.

“We have been impoverished and we want medicines. I’m standing idly by in the face of my children because I can’t get them what they want seeing as my money is trapped in the bank,” Moussawi said.

Later in the day, gunshots were fired after an army first lieutenant stormed BankMed in Chehim in Mount Lebanon.

There were also unconfirmed reports of other similar incidents in Hamra, Concordes and Nabatieh.

The confirmed incidents raise the number of bank heists this week in Lebanon to seven. The savings of depositors in the country have been devalued and trapped in banks for almost three years amid a crippling economic crisis.

They are usually acts of economic desperation by depositors with no criminal record trying to settle bills, and have drawn wide sympathy among the general public.

On Wednesday, a young woman held up a bank in central Beirut using a similar modus operandi, in what she said was an attempt to retrieve the savings of her sister, a cancer patient.

Sali Hafiz became an instant hero on social media, and a phone picture of standing on a desk inside the bank during the heist became viral.

Also on Wednesday, a man held up a bank in the city of Aley northeast of Beirut, the official National News Agency reported.

Last month, a man received widespread sympathy after he stormed a Beirut bank with a rifle and held employees and customers hostage for hours, to demand some of his $200,000 in frozen savings to pay hospital bills for his sick father.

He was detained but swiftly released.

Lebanon has been battered by one of its worst-ever economic crises.

Its currency has lost more than 90 percent of its value on the black market, while poverty and unemployment have soared.

The parliament is about to legalize the theft of our savings by converting our dollar deposits into worthless Lebanese pound , hence granting all banks an amnesty. I guess the next step will be to storm the parliamentarians homes with real guns.