'I was part of it': Hushed crowds pack London for queen's funeral 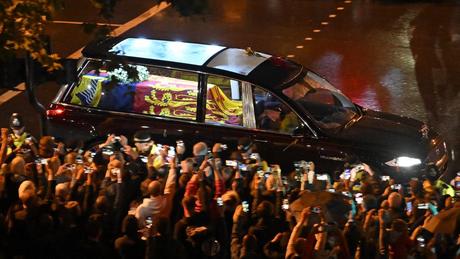 Mourners packing the streets of central London Monday for Queen Elizabeth II's funeral watched in awe as the coffin of the only monarch most Britons have ever known made its final journey.

A sea of arms held up mobile phones in Parliament Square to film the spectacular procession bearing the queen's casket from Westminster Abbey after a service attended by leaders from around the world.

Retired nurse Maryann Douglas, 77, who moved from New York to London four years ago, struggled to find the words to express her feelings after waiting for hours to pay her respects.

"I knew it would be good but it was better than I expected, I had tears in my eyes and chills," she said.

"It's an emotion you can't really describe when you see the queen's coffin go by."

Nearby, logistics manager Bev Catton, 41, was soaking up the atmosphere with her young daughter as Britain turned a page on seven decades of history.

"It's something she can look back on and think: 'I was a part of it'," Catton said.

"We do pomp and ceremony very well."

A total silence fell over the thousands who had gathered in Hyde Park as they watched the funeral service being broadcast on big screens.

Rhiannon Turnbull, 31, and her partner Julie Taylor had driven four hours from south Wales to be at the heart of events.

"We can be very proud of being all together here in this park. There are people of every age, children, adults."

As dawn broke over the River Thames, well-wishers were already streaming out of the underground rail stations to join those who had camped out overnight in the Whitehall government district.

"It's part of history," said Bethany Beardmore, 26, an accountant whose brother is a Grenadier Guard and part of the ceremonies.

"Not in my lifetime is there going to be another queen."

Beardmore arrived at 9:00 pm (2000 GMT) on Sunday but, fuelled by too much sugar and caffeine, found it impossible to sleep in the cold.

"Everyone was chatting," she said.

Margaret McGee, 72, had come from Northern Ireland as what she called a small token of appreciation for the queen's long service. She said she had met people from Liverpool, Scotland and Wales.

"She worked so hard all her life, devoted herself to the country," she said.

"She never gave up to the very end, she never had a retirement."

The queen's flag-draped coffin had lain in state at parliament's Westminster Hall from Wednesday.

Hundreds of thousands are estimated to have filed past to pay their respects.

The doors to the hall were finally shut at 6:30 am on Monday to prepare for the coffin's transfer to Westminster Abbey.

"It feels amazing," she told AFP. "When they came to me and said, 'Right, you're the last person', I said, really?"

Heerey, from Melton Mowbray near Leicester in central England, had queued through the night but was also joining the crowds for the procession.

"A long day but very well worth it," she said.

In Windsor, six giant screens showing the funeral were set up along the sweeping Long Walk to the queen's final resting place in the castle.

Elizabeth Turner, 60, had come all the way from British Columbia in Canada, which also counted the queen as head of state, and was waiting with her niece among the families sharing food and chatting.

"It is like a pilgrimage to be at Windsor. It's poignant to see all these people who have come to pay homage," she said.

"It is a symbolic place because when the queen enters Windsor Castle it will be the last time to see her. We wanted to witness that."

Marianne Smith, 39, struggled to contain her emotions after leaving home early with her family to be among the crowd.

"We watched with all these people from the Queen's home, Windsor, and it was lovely, so emotional, just beautiful," she said. "All the crowd lived the moment."